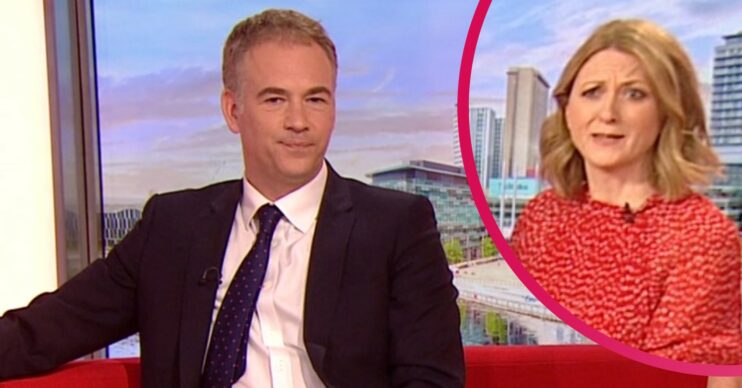 BBC Breakfast viewers were left shocked when the show was forced off-air this morning (March 26).

Viewers were sitting watching at home when the studio began to echo with the sound of a fire alarm.

Apprentice winner Harpreet Kaur was being interviewed by Roger Johnson and Rachel Burden at the time.

BBC Breakfast viewers could hear the alarm being sounded, and the presenters couldn’t hide the shocked looks on their faces.

After some initial confusion, Roger and Rachel apologised to viewers. The show then went off the air and the orange BBC Breakfast screen was shown in its place.

Many viewers didn’t seem to mind the interruption. However, some were baffled by the speed of the evacuation.

Viewers took to Twitter to complain, with one saying: “BBC Breakfast showing a fond disregard for fire evacuation procedures there”.

“How NOT to react to a fire alarm on #BBCBreakfast this morning…,” tweeted a second.

A third said: “The emergency plan to evacuate BBC breakfast show didn’t really go to plan, was there even a plan? It maybe needs reviewing!”

“BBC Breakfast presenters acting like every school kid, ‘do we really have to leave?’ Yes, generally a fire alarm means you need to leave, quickly #BBCBreakfast,” joked a fourth viewer.

While a fifth confused fan tweeted: “Unbelievable! Do they not know what to do if an alarm sounds telling you to evacuate #bbcbreakfast?”.

“Instead of getting the hell out of there. He’s sat on the sofa continually apologising. Evacuate fool. #bbcbreakfast,” added a sixth concerned viewer.

Elsewhere, another added: “Guys if you have a fire alarm going off and there is no planned test, it’s probably a really wise thing to down tools and get out of the building. If your workplace doesn’t go through fire safety on your induction, do have words. #bbcbreakfast.”

Thanks for all the messages about the fire alarm that interrupted the end of this morning’s programme.
Everyone is safe and is back in the building.

It also thanked fans for showing their concern.