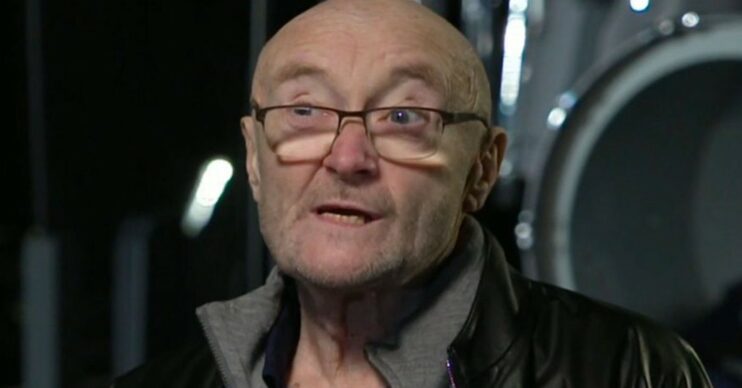 The Genesis singer spoke about his health

Viewers who tuned into the show were left shocked and upset by the appearance of the Genesis legend, who is gearing up to tour.

The beloved musician confessed that his deteriorating health was “very frustrating” for him.

He told viewers that he’s become so frail that he’s now unable to play the drums anymore.

“I’m kind of physically challenged a bit which is very frustrating because I’d love to be playing up there with my son,” said Phil.

Asked if he can still play, Phil explained: “No, I’d love to.

“But I mean, I can barely hold a stick with this hand. There are certain physical things that get in the way.”

Phil then went on to suggest that the band would retire after their upcoming tour.

“We’re all men of our age and I think to some extent, yeah, I think it probably is putting it to bed,” he said.

“I think yeah, I think just generally for me, I don’t know if I want to go out on the road anymore.”

Blimey, that Genesis report on BBC Breakfast. As much as I love Genesis, there’s no way I’m shelling out for a ticket with Phil Collins in that state. He’s not a well man.

As a result, viewers rushed to social media to share their concern for the singer, and urge him not to take part in the upcoming tour.

One viewer said: “Gosh Phil Collins isn’t looking too good (sorry), bless him, I hope they aren’t just using him for another tour.”

“Not sure if it’s a good idea. Please take care, Phil. Sending my love to you,” said a second fan.

Meanwhile, another tweeted: “Phil Collins on #bbcbreakfast,” alongside a crying emoji.

Phil Collins health: What illness does he have?

Sadly, Phil has been battling ill-health for years.

He said he once came “close to dying” when he was rushed to hospital with pancreatitis.

“I was very close to dying,” he said in 2016. “Within months you’re drinking vodka from the fridge in the morning and falling over in front of the kids, you know.

“My organs were kind of [bleep] It was spirits; corrosive stuff.”

Furthermore, the drummer has also sustained an injured vertebra in his upper neck, which has led to crippling nerve damage.

As a result, it’s impacted his ability to play the drums.