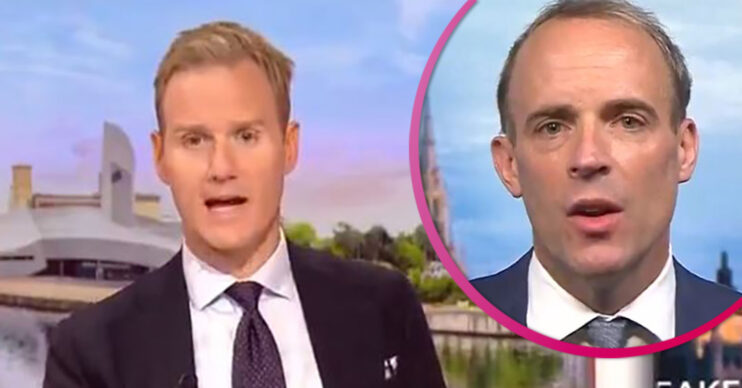 BBC Breakfast: Dan Walker hits back as he’s accused of being ‘nasty’ to Dominic Raab

Dominic Raab was questioned on his recent holiday to Crete

BBC Breakfast host Dan Walker has hit back at backlash over his interview with Dominic Raab today.

The foreign secretary appeared on Wednesday’s show to discuss the ongoing crisis in Afghanistan following the Taliban takeover.

However, Dan faced criticism after he grilled Mr Raab on the situation and questioned the MP’s recent holiday to Crete, Greece.

The presenter said: “You’re a front-line politician, you’re aware of the optics.

“When I asked our viewers on social media this morning what we should ask you as foreign secretary overwhelmingly, and I’m not saying this as a joke the question was ‘Did you have a nice holiday?’

“The reason for that Mr Raab, whilst the Taliban were marching on Kabul, while British troops were under pressure the vision that many people have and still have this morning was that you were on a beach in Crete and you didn’t come home for another two days?”

Mr Raab replied: “So Dan, first of all with hindsight I wouldn’t have gone away at all.

“…so I could get back to the apartment so I could engage in the Cobra meeting.”

He added: “The idea I was lounging on a beach or one report that I was paddleboarding in the ocean, these things are just nonsense when they’re put around.”

Dan then asked: “Fully understood and I appreciate your honesty in answering those questions.

“So can I ask you one further one on that, were you then told or asked to come home on Friday and then persuaded the Prime Minister to allow you to stay until Sunday?”

Mr Raab responded: “That is all nonsense.

“I’m not going to go back into the answers I’ve given over the week again but that is not accurate.”

For those accusing me of being ‘nasty’ & ‘unpleasant’ to @DominicRaab … I simply asked the Foreign Secretary for facts: when? why? & where? are the journalistic basics.

If that is ‘nasty’ & ‘unpleasant’ then I’m not sure you’ve watched enough telly 👍🏻pic.twitter.com/1VT2v0w2RV

However, viewers watching weren’t impressed with Dan’s grilling and took to Twitter to criticise him.

The presenter then hit back at the criticism after being branded “nasty” and “unpleasant”.

Dan tweeted: “For those accusing me of being ‘nasty’ & ‘unpleasant’ to @DominicRaab…

“I simply asked the Foreign Secretary for facts: when? why? & where? are the journalistic basics. If that is ‘nasty’ & ‘unpleasant’ then I’m not sure you’ve watched enough telly.”