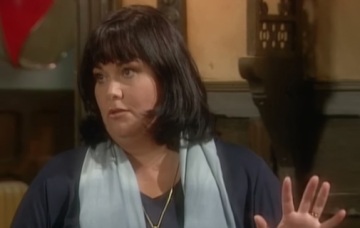 Kate Phillips thinks we love them!

Licence fee payers are up in arms after a BBC boss claimed telly viewers ‘love repeats at Christmas’.

Controller of Entertainment Kate Phillips came under fire after it emerged nearly 60% of this year’s festive offerings from the BBC have aired on TV before.

Among the reported 301 shows to be repeated in this year’s Yuletide schedule for BBC One and BBC Two are classic episodes of Morecambe and Wise, The Vicar of Dibley, Dad’s Army and Porridge.

However, Beeb exec Phillips reckons people regard the same old shows as perennial favourites – and want to watch them over and over again.

Read more: The 10 best Christmas films on Netflix to binge on

Repeats on the BBC’s main two channels for the Christmas season are believed to be up 9% from last year. Half of 2017’s festive programming is thought to have been seen before.

It is also reported that non-original shows make up 73% of this year’s line up on BBC Two.

“We do show repeats but we find that people love a bit of repeats because actually Christmas is all about tradition and family traditions,” Phillips is reported to have said.

“When you go back home you do a lot of things the same way. You hate it if your parents change something.”

She added: “When I heard that BBC Two were showing The Good Life Christmas special again I was cock-a-hoop, because Margo Leadbetter with The Times paper hat on her head doing a homemade cracker is a great moment and you want to see it again and again.”

However, Chief of the TaxPayers’ Alliance John O’Connell told the Mirror that viewers could feel ‘short changed’ by the uninspiring schedules.

He said: “No one minds a re-run of a classic film or an episode of Only Fools and Horses, but when there is so little original content at this time of year, licence fee payers might be feeling a bit short changed over the festive period.”

A BBC spokesperson added: “More than 90 percent of of BBC One’s peak time schedule is new this year. Viewers love a few old favourites at Christmas as well.”

Giving their verdicts on social media, many viewers seemed unconvinced by the BBC’s approach.

Accusing the Beeb of a ‘rip off’, one person tweeted: “Do you really think it is acceptable that half of your Christmas content is repeats? I do not pay my licence fee to pay for shows I’ve already seen,  on one of the few times of the year I actually have time to watch.”

Another observer said: “Please note that I have already paid my licence fee for this Christmas in previous years so presumably I don’t need to pay again until you put on some new programmes.”

And a third joked: “Make time for those you love this Christmas by not watching old films and repeats on the BBC.”

Many other viewers have also slammed the Christmas Day line up – which includes Call The Midwife and Strictly – for lacking originality. But what do you make of it all?