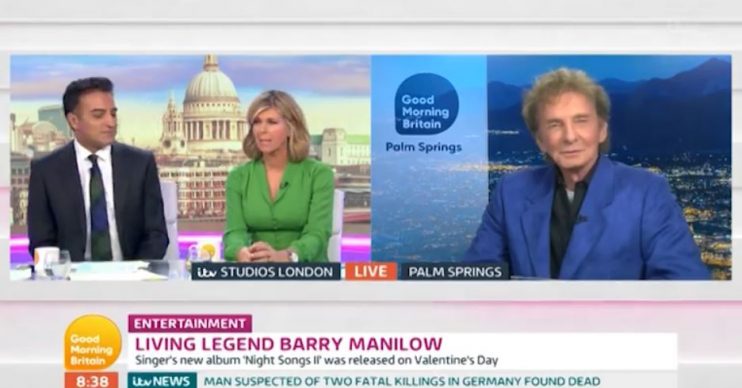 No one saw that coming

Presenter Kate Garraway was left speechless after singer Barry Manilow interrupted her and joked about ‘sex and romance’ on Good Morning Britain.

The Mandy hitmaker, 76, was on the programme today (February 20 2020) to chat with Kate and her co-host Adil Ray via video link from Palm Springs in California.

Barry, who came out as gay in 2017, was talking about his relationship with his husband, Garry Keith, when Kate attempted to steer the conversation back onto the legendary singer’s music.

Barry interrupted her and quipped: “Talking about sex and romance…”

Kate appeared lost for words as Barry went on: “I’ve got this new album and it’s sexy and romantic.”

He explained how his latest release features really “beautiful” tracks.

Kate then joked: “You must be the soundtrack to many a romantic evening.”

Barry said he thinks he has indeed and said he’s “been in the backseat of the car with you!”

Talking about sex and romance…

That prompted Kate’s co-host Adil to joke that Barry was “not the first guest to say that” to the former I’m A Celebrity star, who laughed and said you could “fill a whole Wembley Stadium” with them.

After confirming his sexuality publicly in 2017, Barry spoke about his marriage and revealed the heartbreaking reason he hid the fact he is gay.

At the time, he said he decided to keep his sexuality a secret for decades because he feared he would leave people ‘disappointed’ if they knew.

Barry, who has been in a relationship with his partner Garry for over 40 years, told People magazine: “I’m so private. I always have been. I thought I would be disappointing them if they knew I was gay. So I never did anything.”

The pair tied the knot in a secret ceremony in Palm Springs in April 2014 and news of their marriage made headlines the year after.