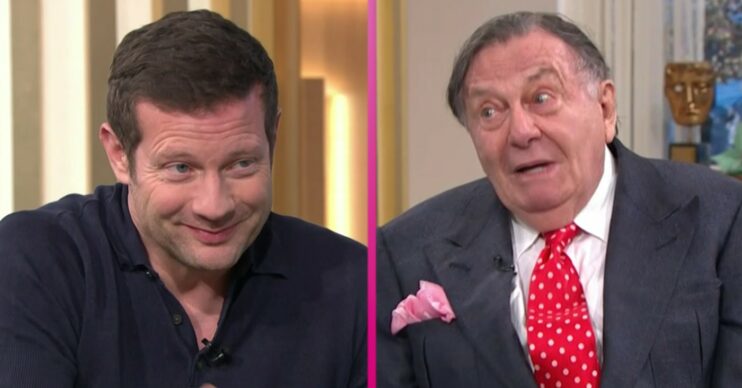 He congratulated Dermot for 'coming out'

The 87-year-old comic joined the hosts on the sofa to discuss his upcoming tour The Man Behind The Mask.

However, the interview soon took an awkward turn.

Barry Humphries on This Morning

The chat started on a funny note as Alison Hammond informed Barry that he had tissue stuck to his collar.

Taking off the tissue, the comedian explained that the make up crew used it whilst touching up his face.

Barry later went on to single out Dermot.

As Alison began to laugh, Barry continued: “Last year, no, no, when he came out and told us about his sexuality.

“I think a lot of people respected you for that.”

Alison couldn’t contain her laughter as Dermot attempted to correct the star.

The presenter said: “Thank you, I’ll pass that on to the gentleman who is here Monday to Thursday.”

Dermot then joked: “Don’t worry, your memory is crystal clear, thank you for your kind comments.”

I want to congratulate you by the way on your courage

Barry, who appeared confused, added: “No, your bravery was remarkable. Can I say, we’re all in show business.”

The comment clearly got to Alison as she struggled to compose herself on the sofa.

The comedian was referring to Phillip coming out as gay in February last year.

Don't care if meant or not when said Dermot brave for coming out!#ThisMorning

Barry Humphries is the best tonic on a cold Friday, my sides are sore from laughing 😂 🙌🏻#thismorning #itv

@thismorning thank you Barry , made me cry laughing 😂

My word, Barry Humphries is a global treasure. #ThisMorning

— Richard Chester (or the angriest 30something Brit) (@RACNOAPOLOGIES) November 26, 2021

This Morning viewers in hysterics

Viewers were in hysterics over the moment, with one saying: “Laughing so hard watching @ThisMorning… Barry Humphries mixing @radioleary up with @Schofe.”

A second tweeted: “#ThisMorning that Barry Humphries was so funny I’ve rewound the TV to watch again.”

A third wrote: “Screaming laughing at Barry Humphries on #ThisMorning, thanking Dermot for coming out! How Alison didn’t wet herself howling is beyond me.”

In addition, a fourth said: “Barry Humphries is the best tonic on a cold Friday, my sides are sore from laughing.”

Another exclaimed: “My word, Barry Humphries is a global treasure. #ThisMorning.”

A sixth shared: “@ThisMorning Thank you Barry, made me cry laughing.”