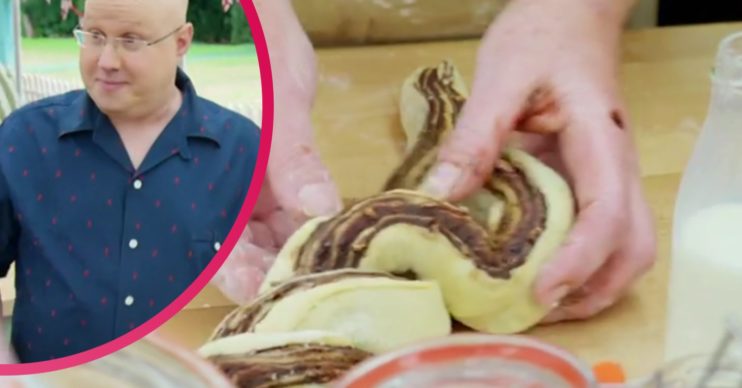 Bake Off: Matt Lucas has viewers in fits over X-rated pun

GBBO viewers were in for a shock this week

Matt Lucas had Bake Off viewers in fits during this week’s episode of the Channel 4 competition.

Chocolate week left many of the contestants battling for survival after a shockingly poor first challenge that had some viewers up in arms.

There were soggy brownies aplenty, but not many happy faces between them.

As the technical challenge began, Matt decided to pop over to Linda’s kitchen to see what kind of storm she was cooking up.

What did Matt Lucas say on Bake Off?

As she stretched out her Babka cake, a traditional Jewish treat, she complained about her dough not being lengthy enough.

Leaning over to take a look, Matt said: “Maybe if you stroke it it’ll get a bit bigger!”

Linda couldn’t help but let out a giggle, before responding: “Well that’s generally how it works isn’t it!”

What did GBBO viewers say?

Channel 4 viewers rushed to social media to compliment Matt on his cheeky sense of humour.

One said: “Maybe if you stroke it it’ll get a bit bigger! Calm down Matt!”

"Maybe if you stroke it it will make it bigger"
Can you say that on TV before the watershed?! 😂😂 #gbbo

While a second added: “Can you say that on TV before the watershed?”

What did Paul Hollywood say on Great British Bake Off to annoy viewers?

Last week, Paul left many viewers fuming when he made a remark about the NHS.

When Prue asked why Paul had set the rainbow bagel challenge, his response left some fans stunned.

“I think bagels are a great challenge when you’re making bread,” he replied. “You’ve got to boil them which is unusual.

“I think the rainbow colours for me, although it originated over in the States, I think it represents the NHS.

“It does now certainly,” he added.

The rainbow flag has been used this year as a celebration of the NHS and its frontline workers.

Are you enjoying the series so far? Leave us a comment on our Facebook page @EntertainmentDailyFix and let us know what you think of GBBO.