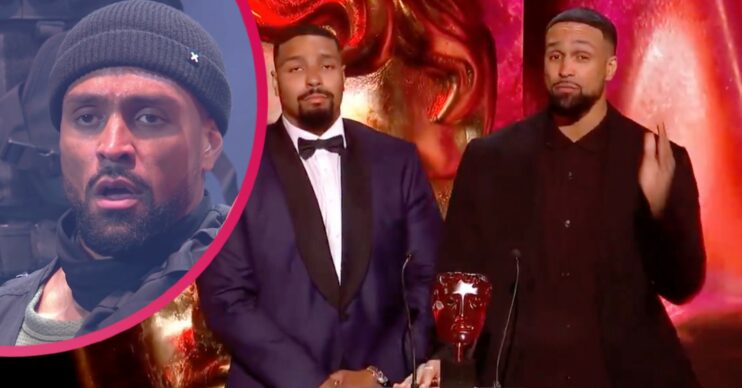 The Diversity stars took home the award for the Must See TV Moment of 2020 for their BLM-themed dance on Britain’s Got Talent.

At the time, the performance received more than 24,000 complaints to broadcasting regulator Ofcom.

Ashley and Jordan Banjo win at the Bafta TV Awards

And it appears some weren’t impressed with their win on Sunday (June 6).

During the ceremony, Ashley and his brother Jordan appeared on the stage to accept the award.

The brothers reflected on the backlash they’d previously received over the routine.

Ashley, 32, said: “Being in a storm of 30,000 comments just being in a torrent of threats, that support made a difference.

“I want to say thank you to the people who poured that abuse online, you showed why that performance was necessary.

“As much as there’s so many conversations and so much needs to change, this is what change looks like.”

“This is so much more than just an award!” @AshleyBanjo and @Jordan_Banjo accept the award for @virginmedia’s #MustSeeMoment Diversity’s routine inspired by the events of 2020 on Britain’s Got Talent! @BGT @ITV @Diversity_Tweet pic.twitter.com/nxfj0zw1O1

Furthermore, he added: “I’m so thankful to all those people, for me it’s not about presenting the minority, standing here right now this represents the majority, thank you so much.

Meanwhile, Jordan, 28, appeared delighted as he celebrated the special moment alongside his brother.

However, not everyone agreed with the public vote.

Taking to Twitter, one said: “Get woke, go broke. Goodbye Bafta, I won’t watch you again if you can award a routine that had over 30,000 complaints, what’s the point of you.”

A second added: “Haha it’s all fixed to make them feel loved and adored. Who actually votes for this? I didn’t see any advert to vote. Clearly a selected few. Imagine winning something based on the colour of your skin. Wow.”

In addition, a third wrote: “This is a disgrace. Woke woke woke BBC Bafta woke.”

A fourth complained: “Up for a Bafta award for being on their knees in support of BLM. Welcome to woke great Britain.”

Meanwhile, others defended Diversity after beating the likes of Gogglebox and Nigella Lawson.

One shared: “Yes, yes, yes! So well deserved. Great speech Ash, it DOES represent the majority and NOT the minority, even though there were 30,000!!”

Another wrote: “Massive congratulations to @AshleyBanjo and everyone else on that stage that night.

“You guys completely deserve that BAFTA voted for by the public. Your performance was so heartfelt and emotional.”

A third hit back: “A well-deserved award and recognition! Well done guys.

“Don’t let the ignorant people bring you down. Walk proud.”

When did Diversity perform on BGT?

Meanwhile, the dance took place on the ITV talent show back in September.

Following the performance, Diversity were met with a barrage of criticism and complaints to Ofcom.

Furthermore, earlier this year, Ashley opened up about the criticism during an interview with Entertainment Daily!.

He told us: “There was and there still is [hate and trolling].

“All I have to do now is look in a direction people don’t like and you get a wave of people at your neck. But it is what it is.

“All I can do is slightly separate myself from it and know at the end of the day that it isn’t real. Half of the accounts that talk to you aren’t even real.

“But I can’t stop people having an opinion and I think what keeps me level is I’ve got a lot of love and a lot of support.”