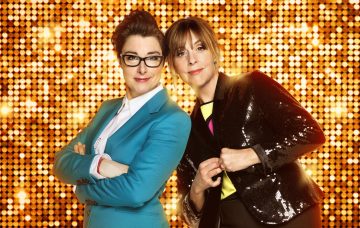 It seems unlikely BBC bosses will be echoing the “Didn’t they do well?” catchphrase of former Generation Game host Sir Bruce Forsyth after the game show’s revival with Mel and Sue at the helm dropped over 2 million viewers between the first and second episode, according to reports.

The Sun claims over a third of the rebooted series’ audience did not return to watch again after the first show was slaughtered by critics, with Entertainment Daily’s Adam Postans pronouncing the Easter Sunday showing “dreadful”.

Last Sunday’s show was watched by just 3.9million people at its peak according to the newspaper, with 6.1million tuning in for the previous episode.

It is also believed the overall average viewership slumped by over a third.

The two-part comeback contained plenty of nostalgic treats – including plate spinning, sausage making and pottery – and celebrity appearances but many viewers felt the revival fell flat.

Some criticised the use of canned laughter – suggesting that relying on it despite having filmed in front of an audience demonstrated the comedy was not up to scratch.

Others claimed original host Brucie would have been shocked at the new version of the show.

Larry Grayson took over between 1978 and 1981, pulling in audiences of 25million.

Jim Davidson, who took over the presenting reins during the 1990s run, blasted Mel and Sue for not knowing how to improvise.

He said: “They’re not right, they won’t know how to ad-lib.

“They’re not there to teach them how to bake a [bleep]ing cake.

Jim continued: “I don’t know these women, I’ve never heard of them but you need someone that’s going to be able to ad-lib and drive the show along.”

What did you think of Mel and Sue on The Generation Game? Have your say by leaving us a comment on our Facebook page @EntertainmentDailyFix!