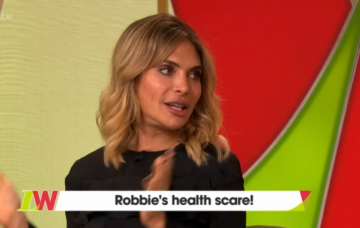 He spent a week in intensive care last year

Singer Robbie spent a week in intensive care over what was thought to be blood on the brain after cancelling tour dates for his world tour.

Ayda said it was an “awful” time for the couple but, thankfully, Robbie is now doing “amazing.”

Read more: Robbie Williams reveals ‘huge tattoo of his OWN FACE’ on his chest

When asked about her hubby, Ayda told the panellists: “He’s amazing. We’ll see him next week, he’s doing Soccer Aid and he’s great.”

She continued: “Last year he had some health issues and it was an awful time for us.”

Ayda went on to talk about the masive lifestyle change Robbie made after his health scare, and she couldn’t help but poke a little fun at her hubby.

She quipped: “He says he’s vegan… vegan-ish. I don’t think you can have hamburgers if you’re vegan.”

Ayda told the panellists she was actually in America while Robbie, 44, was in intensive care.

“That was tough,” she said. “You’re on a completely different timezone and you don’t know what’s happening and you just want everything to be okay.

“Everything is okay, everything’s great,” she added. “My big monkey is doing really well. He’s still jazz hands and ripping his clothes off!”

Robbie fell ill while on tour and was taken to hospital, where he spent seven days being monitored in intensive care before being given the all-clear to fly to his family in America, where he received further treatment.

He has not disclosed any details of his health scare, other than the fact it was related to brain abnormalities in a scan thought to be blood on the brain.

Earlier this year, Robbie opened up about his health scare and said it made him realise he needed to take better care of himself.

Robbie told The Sun: “Once you’ve been on the planet for 43 years, you realise that – even if you’ve got everything that I have – you’re not invincible.

“So from now on I’m going to look after myself a lot more carefully.”

This year, Robbie has been busy promoting his new solo music and being a dad to his two children, daughter Theodora, five, and his three-year-old son Charlton.