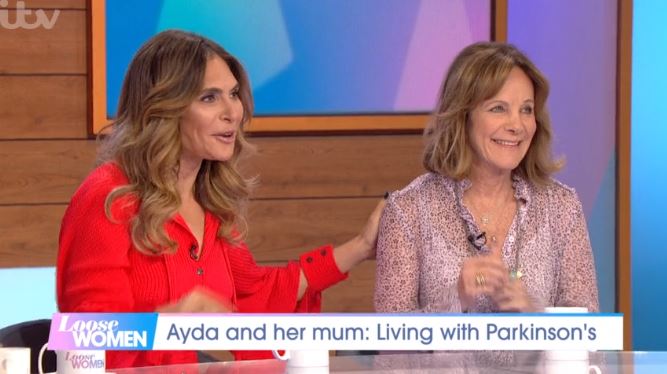 She has "moments of misplaced anger" about the situation

Ayda Field has confessed she has “moments of misplaced anger” about her mother’s Parkinson’s disease diagnosis.

The 40-year-old actress has opened up about her mother Gwen’s battle with the degenerative disorder – which affects the central nervous system and the sufferer’s motor skills – and admits that the illness has turned both their lives upside down.

Ayda – who is married to pop star Robbie Williams – occasionally has feels of anger in which she questions why her mum had to get sick and she is learning on how to deal with it and be the best support for Gwen as she can each day.

Speaking on ITV show Loose Women – on which she was a regular panellist – she said: “It’s a very confusing time. There are such wonderful blessings in my life – I have this amazing baby, an amazing family and I loved X Factor – all these moments of joy, and then these sharp drop offs. I’d be awake lying in bed crying, Rob would be asleep.”

“I’m still figuring it out. There’s these weird moments of misplaced anger I have. There was this moment I was angry at my mum for being sicker [than someone else]. [I thought] ‘Why did you have to get the aggressive kind? Why are you on medication?’ It doesn’t even make sense. How can I be mad? And then you feel guilty for being angry about that.

“No one trains you… there’s nothing you can do to anticipate all the levels you feel. You’re kind of free falling and you have to learn everything you can. This is the journey. I can’t sidestep it, there’s no shortcuts. I don’t know how the journey goes … There’s the dark and the light with every situation. I have such gratitude to have my mother back. She’s come alive, she’s vibrant, she’s with it, she’s alert. She’s the mum I knew, she was kind of slipping away. Now she’s the mum I knew from years ago.”

It was Ayda that noticed that Gwen’s balance was deteriorating and that he hands were prominently shaking – both symptoms of Parkinson’s – and it was her who flagged her symptoms to her own doctor and urged her mother to be assessed by doctors.

As soon as the symptoms were described the Paranoid actress’ doctor warned her that it was likely her mother had Parkinson’s.

Ayda said: “She’s my BFF. This is tough. Her diagnosis is tough. If you know Gwen, she’s kind of like ‘doop-de-doop-de-doop…’ her bumping into things or shuffling or tripping wasn’t anything unheard of. I think about two years ago she got hospitalised with pneumonia while Rob was on tour.

“I noticed a shift then and it kind of just got progressively worse. I remember being at Soccer Aid last year and sitting her down and having a chat with her and I just said, ‘Something’s not right, you’ve got to feel that, do you feel a difference? We need to figure this out.’ It went from being, ‘Oh that’s funny, Gwen’s doing that thing’, to, ‘Now I’m getting a little nervous that something’s wrong and I can’t figure out what it is.'”

Ayda revealed that she had “written Parkinson’s off” as a possibility as both she and mother Gwen believed she had been tested for the disease, but it turned out the test was for rheumatoid arthritis.

She said: “And then it was about two days before the Royal wedding [Princess Eugenie’s wedding], you know when you have that instinct … she came into the room and she was talking about what she was going to wear … I’d seen the hand [shaking] before, something in that moment just did not sit right with me. I called my doctor, I said I know she’s not your patient [but] she needs to see a neurologist.

“She was going to put it off until after we got back and we were going to do The X Factor, she said, ‘I’ll do it in three months’. So I started talking to my doctor about the things I’d noticed with my mother, she said, ‘I don’t mean to worry you but this sounds like classic Parkinson’s.’ The next day we got her into the neurologist and they confirmed that’s what it was.”

During the episode of the chat show Gwen came out and joined her daughter Ayda on the panel and revealed that she was “doing well” and that he treatment was helping alleviate her symptoms.

Gwen said: “I’m really doing well. I think after I got the diagnosis and started getting treatment, I started being myself again. I’m at a point now where I’m very connected and animated. I wasn’t that person for so long.”