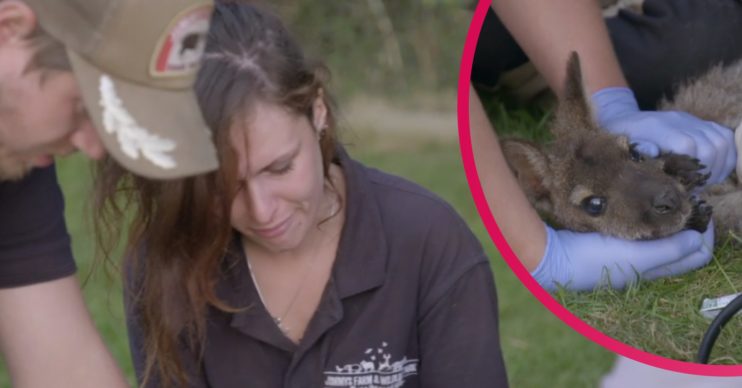 Autumn at Jimmy’s Farm: Viewers in bits as Wendy the wallaby is put down

Some Channel 4 viewers 'couldn't cope' with the emotional scenes

Autumn at Jimmy’s Farm had Channel 4 viewers in bits last night as it showed a poorly wallaby being put down.

During the first episode of the new documentary series, giving viewers a look at life on Jimmy Doherty’s farm and wildlife park during the autumn months, viewers met Wendy the wallaby.

What happened with Wendy the wallaby on Autumn at Jimmy’s Farm?

Unfortunately, Wendy had a serious abscess on her face and consequently, they had to call in Henry the vet to look at it.

Henry said that while her quality of life was just about acceptable for now, it wasn’t likely to continue that way for long.

“Unfortunately, I’m not sure what else we do can do for you, little one. The infection has very much taken hold.”

He told Wendy’s keeper Tamzin and the others that the kindest thing they could do would be to put Wendy to sleep.

Heartbroken, Tamzin stroked and comforted the animal as it died.

Even vet Henry, despite having put down sick animals before, was visibly emotional.

He said to the team sadly: “Sometimes this job is the worst, seriously you guys… just rubbish.”

What did Autumn at Jimmy’s Farm viewers say about Wendy the wallaby?

On Twitter, those watching at home were in tears.

One said: “Loved watching this tonight – although cried like a baby at poor Wendy. Her keeper really cared! #autumnatjimmysfarm.”

Another tweeted, with a crying face emoji: “#autumnatjimmysfarm #WENDY So heartbreaking to watch.”

Loved watching this tonight- although cried like a baby at poor Wendy. Her keeper really cared! 💙#autumnatjimmysfarm

#autumnatjimmysfarm #WENDY 😢💔 so heartbreaking to watch.

Oh poor Wendy! Can’t cope with this. Pour me a wine! #AutumnAtJimmysFarm

“Oh poor Wendy!” someone else said. “Can’t cope with this. Pour me a wine! #AutumnAtJimmysFarm.”

A fifth wrote, “Poor Wendy #AutumnAtJimmysFarm” and added in a separate tweet, “This show gets you in the feels every time.”

A sixth viewer said on Twitter: “#AutumnAtJimmysFarm on @Channel4 is/has been a great programme, sad for the wallaby though.”

This show gets you in the feels every time 😢 #AutumnAtJimmysFarm

#AutumnAtJimmysFarm on @Channel4 is/has been a great programme. Sad for the Wallaby though.