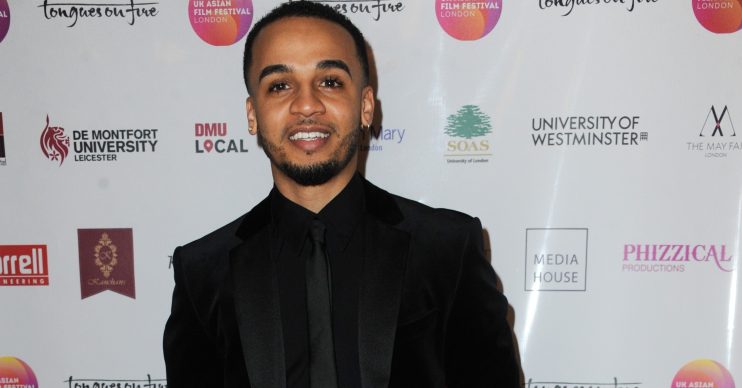 They made the big announcement via a choreographed dance routine

The couple expressed their shock at finding out they’re expecting another little one in an exclusive video with OK! magazine.

They are shown dancing to Pharrell Williams’ hit Happy in an elaborate dance routine that Sarah choreographed herself.

At the end of the touching video, she picks up their two-year-old son Grayson, and holds up the sonograph of their unborn child.

I’m going to be a big brother

The toddler then dances along to the song himself in absolutely adorable fashion.

He is finally hoisted up by Aston and revealed to be wearing a t-shirt that reads: “I’m going to be a big brother.”

In their interview with OK!, they explained how they’d already shared the exciting news with Aston’s JLS bandmates Marvin Humes, JB Gill and Oritse Williams.

Aston explained: “Every December, we try and do a JLS family Christmas thing with all the kids, but it was a bit earlier this year at Rochelle and Marvin’s.

“Everyone has been asking about the wedding, so we said, oh guys, funnily enough, we’ve got a save the date.”

And Sarah added: “We had mocked up these Save the Dates and when they turned them over there was the scan picture! The girls screamed! Rochelle [Humes] and Chloe [Gill] couldn’t believe it.”

The couple first met back in 2011 at Capital Radio’s Summer time ball. A year later she became a back-up dancer for JLS and they officially confirmed their relationship that year.

Aston proposed in 2017, but they have yet to walk down the aisle.

Me, mine and Grayson’s ❤️

JLS shot to fame when they competed on the X Factor back in 2008. The boyband were beaten by that year’s winner Alexandra Burke.

Aston went on to appear on Strictly Come Dancing in 2017 but exited with partner Janette Manrara in week seven.

But all was not lost for the performer, as he made a triumphant return and ended up winning 2018’s Strictly Christmas special.