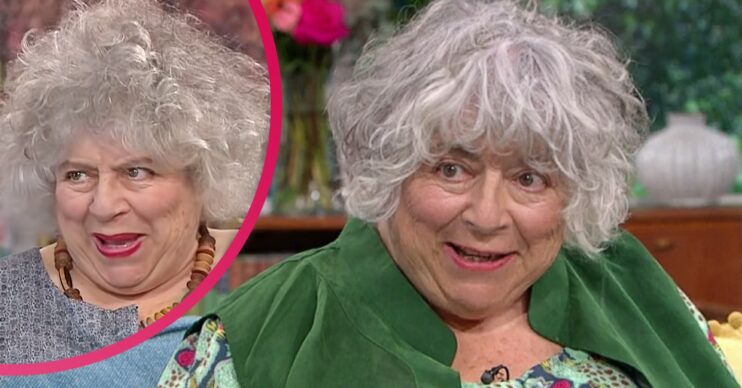 As Miriam Margolyes swears on This Morning, here’s all her funniest moments

All hail the national treasure that is Miriam!

Miriam Margolyes once again appeared on This Morning today (Tuesday September 7) and the 80-year-old proved why she’s a national treasure.

The Harry Potter and Call The Midwife actress did not disappoint, either.

As ever, she managed to squeeze out a swear word during her interview with hosts, Phillip Schofield and Holly Willoughby.

But what are the other classic moments from Miriam’s many appearances on the show?

What did Mariam Margolyes say on today’s This Morning?

Miriam plugged her new memoirs on today’s show, and Holly asked her if it was true if she was the first person to swear on British television.

She explained that she once appeared on University Challenge over 50 years ago and she got a question wrong.

Miriam said: “I don’t want to be remembered for saying [mouthed a swear word]!”

Conversation then turned to her weight, and Phillip asked her if it still bothered her.

Miriam Margolyes on This Morning: “No tongues!”

On her 80th birthday in May of this year, Miriam appeared on the show via video link.

As Phillip and Holly wished her a happy birthday and Miriam described how she was going to celebrate, Holly told her that Covid social distancing rules had been lifted and she could enjoy a cautious hug.

“So no tongues, but hugs,” Miriam laughed, as the whole studio cracked up.

A squeeze for Eamonn

Another Miriam appearance saw her ask after Eamonn Holmes.

“How is that boy?” Miriam asked when Phillip mentioned him. “He’s put on a bit of weight.”

When Phillip said he’d actually lost weight, Miriam asked the presenting pair to give him a squeeze from me.

Holly thought she was going to say give him a slap.

“No, a squeeze. And then a slap,” Miriam laughed.

Miriam, live from her holiday home in Tuscany, revealed that she used to do sexy voiceover tapes when she was younger.

“Sexy Sonia Read From My Schoolgirl Diary, that was one,” she explained as Phillip and Holly cracked up.

“They were audiotapes, they were not visual.

“And they were very exhausting because when you’re simulating orgasm as all of you out there know, it’s tiring. You get a headache!”

Queen Miriam and the actual Queen

Miriam also revealed an encounter with the Queen in one appearance.

“I was invited to the Palace as part of British book week, and when the Queen came over to me and she asked me what I did – in a very nice way – I said like a [bleep] – ‘I’m the best reader of stories in the whole world’.”

The Queen moved on to the next person and Miriam soon interjected, and was shocked when the Her Majesty said to her: “Be quiet!”

Her Call The Midwife dream

When Phillip quizzed her about her love for Call The Midwife, Miriam praised all the actresses on the show as “wonderful”.

Revealing she’d like to play a nun on the show, she said: “There’s no end to what I would do to get on that programme.”

Her dreams would soon come true – she appeared as Sister Mildred in series eight.

Miriam Margolyes on This Morning: Ant and Dec get an earful

Miriam Margolyes also appeared on This Morning to celebrate Phil and Holly’s 10th anniversary of presenting the show.

Ant and Dec were also on hand to pay tribute to Phil and Holly.

Miriam was in Melbourne, Australia, and she told them they were “sweet and welcoming”.

But when Ant and Dec tried to move things on, she waved her hand and told them off.