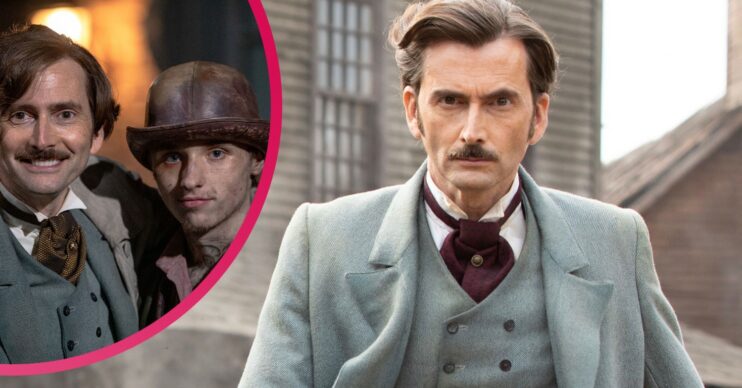 Around the World in 80 Days on BBC One: David Tennant stars with son in adaptation of novel

How many parts is it and when does it start?

Around the World in 80 Days promises to be good family fun over the Christmas season – and lead actor David Tennant stars opposite his own son in the episodes.

The upcoming adventure series is a retelling of a famous story.

So what’s it about, how many episodes is it and who’s in the cast?

Around the World in 80 Days episodes – what’s it about?

Around the World in 80 Days is BBC One’s adaptation of the classic adventure novel.

Asked about the upcoming BBC series, actor David Tennant recently described it as a “romp”.

A BBC synopsis tells us: “The clock is ticking. Join Phileas Fogg, Passepartout and Abigail Fix on their journey Around the World in 80 Days.”

He is attempting to travel around the world in 80 days in a bid to win a lucrative wager.

Along with his sidekick Passepartout and journalist Abigail Fix, Phileas embarks on the challenging voyage long before aeroplanes were invented (the fictional story starts in London on Tuesday October 01 1872).

If only Phileas didn’t suffer from travel sickness and an intolerance of bugs – come to think of it, Phileas would get on very well with DI Neville Parker in Death in Paradise!

Is it a true story?

Around the World in 80 Days is not a true story.

The episodes are based on Jules Verne’s entirely fictional novel of the same name.

However, after the book was published, it inspired acclaimed journalist, Nellie Bly, to make her own attempt at beating Phileas Fogg’s 80-day record.

She made it in 72 days and became quite the celebrity!

How many episodes is Around the World in 80 Days?

Around the World in 80 Days is eight episodes long.

Each episode comes in at just under one hour – about 50 minutes.

Episode one and two will go out together, and will stay on BBC iPlayer.

Around the World in 80 Days will start on BBC One on Boxing Day.

The first episode will begin at 5.50pm, followed by the second episode at 6.40pm.

The double episodes kick off a fabulously festive night on BBC One.

The Death in Paradise special airs at 7.30pm, followed by the beginning of A Very British Scandal at 9pm.

Who stars as Phileas Fogg in Around the World in 80 Days episodes?

The actor stars as English gentleman-turned-adventurer Phileas Fogg in the episodes.

Talking about the show, David said: “I think it’s very apt that it’s set for a Christmas transmission.

“It feels like a genuine piece of family entertainment, something that you can all, you know, grab a mince pie and enjoy together.

“It has that sense of something that everyone can come together, and it works.

“I think it’s got a genuine kind of cross-generational appeal to it and that’s something very special I’ve been involved in.”

Who else is in the cast of Around the World in 80 Days?

Ibrahim Koma portrays Passepartout in the cast of Around the World in 80 Days.

Ibrahim recently hinted at a potential romance between Passepartout and Abigail ‘Fix’ Fortescue.

He said: “Opposites attract. There’s kind of that [attraction] in the air, throughout the whole series.

“But when there’s attraction, there’s also a fight because, you know, they like each other, but they don’t understand each other.”

TV viewers might recognise French-born actor Ibrahim from his role as Lucas in Mother Is Wrong, but he is mostly known for appearances in French TV and film.

She’s known for playing Princess Cecile in The Crown, Eliza Hahn in Spy City, and Greta Overbeck in Babylon Berlin.

Of course, Jason is also known for his role in The Crown, where he played Harold Wilson.

TV viewers will know actor Peter from his roles as Michael in Baptiste, Frank Stanfield in The Accident, Phil Dawkins in Marcella, and villain Ralph Hanson in Poldark.

While David Tennant stars as Phileas Fogg in the BBC adaptation of Around the World in 80 Days, his son Ty also appears.

Ty Tennant stars as a gang leader in New York.

Actor David described the experience of working with his eldest son as “quite weird”.

Talking on The One Show, 50-year-old David said: “It’s a bit of a transition when you move from a parental relationship to colleagues at work.”

He assured viewers that Ty, who is the eldest child of David and his wife, Georgia, did not get given the role solely because of his connections.

He said: “I mean, this is nothing to do with me!

“I did not get him the job.

“Steve Barron, our director, heard that Ty was acting and went and checked him out and thought: ‘Oh, he’s pretty good, let’s have him’.

“And then suddenly you’re on set and having to interact in a slightly different way.

“It’s a mixture of kind of parental pride and worry, I suppose.

“But actually, the truth is that he’s so professional and assured and at home on set that I just really loved it.”

Ty, 19, was adopted by David not long after he and wife Georgia married in 2011.

Around the World in 80 Days starts with a double episode on Boxing Day at 5.50pm.

Will you be tuning in to Around the World in 80 Days? Leave us a comment on our Facebook page @EntertainmentDailyFix.