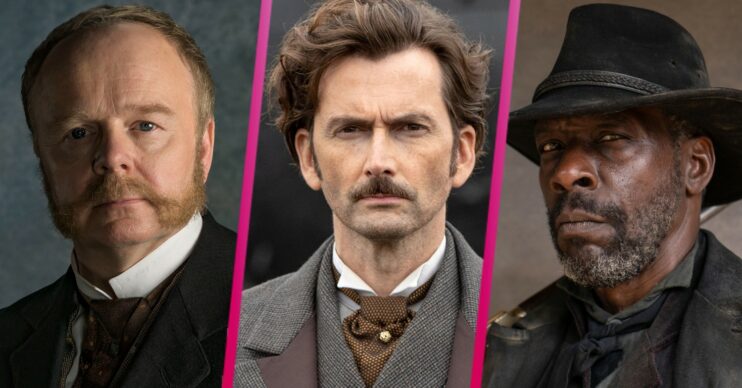 Around the World in 80 Days cast – who stars in the BBC One adventure series?

David Tennant appears opposite his son in the eight-parter!

David Tennant stars in the exciting “romp” that is Around the World in 80 Days this Christmas – but who else is in the cast?

Lead actor David Tennant stars opposite his own son in the episodes!

And there’s a few very recognisable TV actors in the mix, too.

Here’s everything you need to know about the cast of Around the World in 80 Days on BBC One.

The actor stars as English gentleman-turned-adventurer Phileas Fogg in the episodes.

David described the show as a “romp”.

He said: “I think it’s very apt that it’s set for a Christmas transmission.

“It feels like a genuine piece of family entertainment, something that you can all, you know, grab a mince pie and enjoy together.

“It has that sense of something that everyone can come together, and it works.

“I think it’s got a genuine kind of cross-generational appeal to it and that’s something very special I’ve been involved in.”

Of course, TV viewers will know Scottish-born David from a multitude of impressive roles.

More recently, he played a caricature version of himself in lockdown comedy Staged.

Ibrahim Koma portrays Passepartout in the cast of Around the World in 80 Days.

He said: “Opposites attract. There’s kind of that [attraction] in the air, throughout the whole series.

“But when there’s attraction, there’s also a fight because, you know, they like each other, but they don’t understand each other.”

TV viewers might recognise French-born actor Ibrahim from his role as Lucas in Mother Is Wrong.

But he is mostly known for appearances in French TV and film.

Around the World in 80 Days cast – who plays Abigail Fix?

Leonie, 20, is German-born but now based in London.

She’s known for playing Princess Cecile of Greece and Denmark, the sister of Prince Philip, in The Crown.

In 2009, Leonie played one of the leading roles in the Golden Palm winning film, The White Ribbon, and she won awards for the role.

She went on to star in the drama Picco, and Sophie Heldman’s film Colours in the Dark.

Bernard is the editor of The Daily Telegraph in the BBC’s adaptation.

Of course, like his onscreen daughter, Jason is also known for his role in The Crown, where he played Harold Wilson.

He’s just as well known for his comedic roles, and has entertained us as Gavin Strong in Trollied, Simon Harwood in W1A, and Gordon Shakespeare in the film series Nativity.

The Shropshire-born actor started his TV career as Gerry in EastEnders, and went on to star in the likes of Being Human, as the vampire leader William Herrick.

Basically, there’s nothing Jason can’t do, and he has to be one of the UK’s best loved actors.

Around the World in 80 Days cast – who plays Nyle Bellamy?

He’s also played Michael in Baptiste, Frank Stanfield in The Accident, and Phil Dawkins in Marcella.

Peter played Cardinal Sforza in The Borgias and was Commander Laurence Stern in Abi Morgan’s award-winning The Hour for the BBC.

He played the leads in Sky TV’s Critical, created by Jed Mercurio, and in Cuffs on BBC One.

Peter is also well known for his work in theatre.

While David Tennant stars as Phileas Fogg in the BBC adaptation of Around the World in 80 Days, his son Ty also appears.

Ty Tennant stars as a gang leader in New York.

Actor David described the experience of working with his eldest son as “quite weird”.

Talking on The One Show, 50-year-old David said: “It’s a bit of a transition when you move from a parental relationship to colleagues at work.”

He assured viewers that Ty, who is the eldest child of David and his wife, Georgia, did not get given the role solely because of his connections.

He said: “I mean, this is nothing to do with me!

“I did not get him the job.

“Steve Barron, our director, heard that Ty was acting and went and checked him out and thought: ‘Oh, he’s pretty good, let’s have him’.

“And then suddenly you’re on set and having to interact in a slightly different way.

“It’s a mixture of kind of parental pride and worry, I suppose.

“But actually, the truth is that he’s so professional and assured and at home on set that I just really loved it.”

Ty, 19, was adopted by David not long after he and wife Georgia married in 2011.

Actress Lindsay Duncan portrays Jane Digby in Around the World in 80 Days on BBC One.

Unlike the fictitious traveller Phileas Fogg, Jane Digby was a real person.

She was an English aristocrat, famed for her remarkable love life and lifestyle – she had four husbands and many lovers.

Lindsay Duncan, 71, has been on our TV screens for more than four decades.

She played Adelaide Brooke in the Doctor Who special The Waters of Mars in 2009, and Lady Smallwood in the BBC series Sherlock.

More recently, she’s portrayed Ysabeau De Clermont in A Discovery of Witches, Octavia in His Dark Materials, and Grace Playford in The Leftovers.

Around the World in 80 Days cast – Richard Wilson as Grayson

Richard Wilson portrays Grayson in the BBC adaptation of the Jules Verne novel.

We don’t believe it!

Of course, TV viewers know Richard best for playing misery guys Victor Meldrew in One Foot in the Grave.

Actor Richard, now 85, is also known for his role as Gaius, the court physician of Camelot, in the BBC drama Merlin.

Other roles include Father Bernard in New Tricks, Dr. Constantine in Doctor Who, and Frank Uture in Trollied.

Who else is in the cast of Around the World in 80 Days?

EastEnders fans will recognise Gary Beadle as U.S. Marshal Bass Reeves, who enforces the law in the Old West.

Around the World in 80 Days starts with a double episode on Boxing Day at 5.50pm.

Will you be tuning in to Around the World in 80 Days? Leave us a comment on our Facebook page @EntertainmentDailyFix.