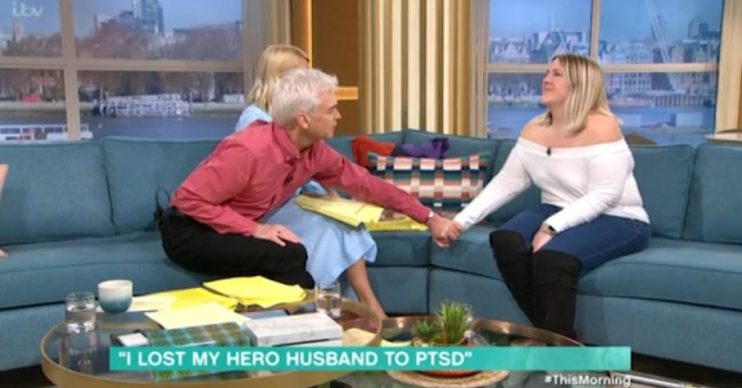 His children were the world to him

ITV viewers were left heartbroken watching Phillip Schofield comfort a soldier’s widow as she fought back tears on This Morning.

During today’s (March 10 2020) episode, hosts Phil and Holly were joined on the sofas by Alicia Davis, whose war veteran husband Jamie took his own life aged 30 due to the effects of post-traumatic stress disorder (PTSD).

'I'm not going to blame anybody.'

Alicia Davis' husband took his own life due to his PTSD and she doesn't want his death to be in vain #ThisMorning pic.twitter.com/6s0AmYpN11

Alicia teared up as she explained how much Jamie had loved their two children.

He had served in Afghanistan with the 4th Rifles Battalion from 19 years of age, but went on to experience PTSD after three major incidents – including one that saw him witness a close friend blown up and another in which a pal was shot and killed.

Speaking on This Morning, Alicia said that when Jamie came back from the war, he struggled to get the help he so desperately needed.

She explained that when he called a helpline over his issues, he was told to seek out other solutions using Google.

After that, he was disheartened as he had dyslexia and struggled to find the information he was looking for.

Alicia told Phil and Holly: “If you’d speak to people, if you’d met him for five minutes, his boys [were] everything to him and he always said he could never do that to them because it would…’

She grew too emotional to speak and Phil leaned in and gave Alicia’s hand a squeeze to comfort her.

Alicia continued: “He just said it was selfish because then he’d leave a world of hurt. So for him to do that meant he must have been hurting so much.”

Utterly heartbreaking for Alicia and her lovely boys.

She also explained how her youngest son “didn’t speak for almost three days” after she broke the news of his father’s death – and at one point, he told her he didn’t want to go to the swimming baths as he “used to do [it] with daddy”.

One said: “Utterly heartbreaking for Alicia and her lovely boys, losing their daddy to suicide. Let’s hope the armed forces and the government finally get their act together and start helping our service men and veterans. USA treats theirs like heroes, it’s about time we do the same.”

Another tweeted: “What a lovely brave lady, heartbreaking to hear her story.”

Utterly heartbreaking for Alicia & her lovely boys losing their daddy to suicide. Let’s hope the armed forces & the government finally get their act together & start helping our service men & veterans. USA treats theirs like heroes, it’s about time we do the 💔😢

What a lovely brave lady, heartbreaking to hear her story

Someone else wrote: “An amazing lady, listening to her story was heartbreaking xx Sending love to you and your family Alicia xx.”

A fifth said: “So heartbreaking, what a brave lady, her story had me in tears. #PTSD.”

“This is so sad,” tweeted a sixth.

An amazing lady, listening to her story was heartbreaking xx Sending love to you and your family Alicia xx

So heartbreaking, what a brave lady, her story had me in tears. #PTSD