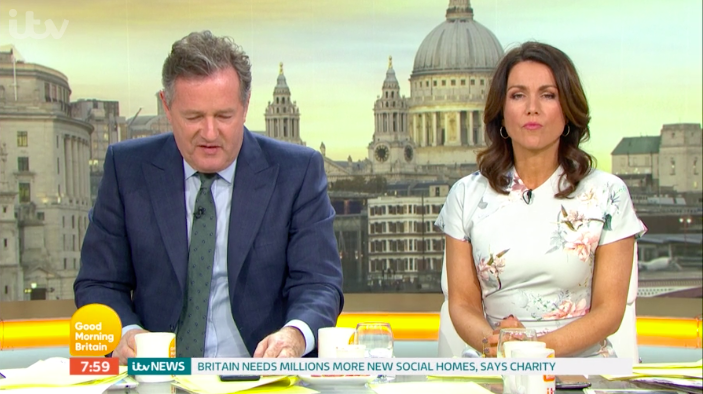 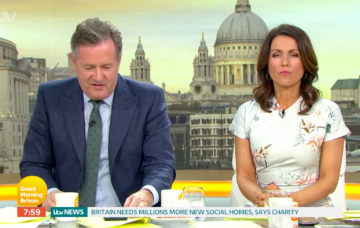 Good Morning Britain debates whether women over 50 are too old to love!

Good Morning Britain sure knows how to start a furious debate, and Tuesday’s show featured a very hot topic.

Twitter went into meltdown after presenters Piers Morgan and Susanna Reid discussed whether women over 50 are “too old for love”.

French author Yann Moix believes women over 50 are too old to love. Lizzie Cundy says it's 'stupid' and a 'disgusting thing to say'. Thoughts? pic.twitter.com/nuroSibimC

The segment was inspired by a 50-year-old French author and TV presenter, Yann Moix who said women of his age are “invisible” to him.

Speaking to Marie-Claire magazine’s French edition, the prize-winning writer reportedly said of dating women over 50: “Come on now, let’s not exaggerate! That’s not possible… too, too old.”

The morning news show welcomed TV star Lizzie Cundy, 50, who said the writer was “stupid” adding: “It’s a disgusting thing to say.” She referenced Liz Hurley, 53, and Elle MacPherson, 54, as examples of stunning women over 50.

Piers then joked to 48-year-old Susanna “the clock is ticking.”

She replied: “I know! I’m just relieved I don’t have to go out with Yann Moix in a couple of years.”

“As if he’s got a chance with a 25-year-old anyway,” added co-star Charlotte Hawkins.

The presenters later asked Lorraine Kelly for her thoughts and she called Yann a “buffoon and a clown,” adding: ” And he’s missing out, frankly.”

Twitter was ablaze with furious responses to the debate.

One wrote: “This is trolling of women, pure & simple. I really feel like we should find ways to not to give this stuff oxygen.”

Another ranted: “This is a classic case of a mediocre white dude thinking he’s being super rebellious and controversial while in fact being utterly bog standard.”

A third tweeted: “Why can’t men like this just keep their mouths closed? Women over 50 are beautiful. Period. End. Of.”

Some mocked the writer, saying: “50+ Women ALL OVER THE GLOBE are devastated that this rather exhausted looking 50 yr old tiny man has written us all off. Jasus 😂.”

Another commented: “Doubt any self respecting woman over 50 would want to date the self-centred [bleep]!”

A few others defended his right to say it, with one tweeting: “It’s very sad but I’m sure a high percentage of men Yann Moix’s age think exactly the same as he does.”

Another said: “He’s entitled to his opinion 😊 I’m pretty sure he wouldn’t like my opinion of most men😋.”

Are you shocked by these comments? Leave us a comment on our Facebook page @EntertainmentDailyFix and let us know what you think.