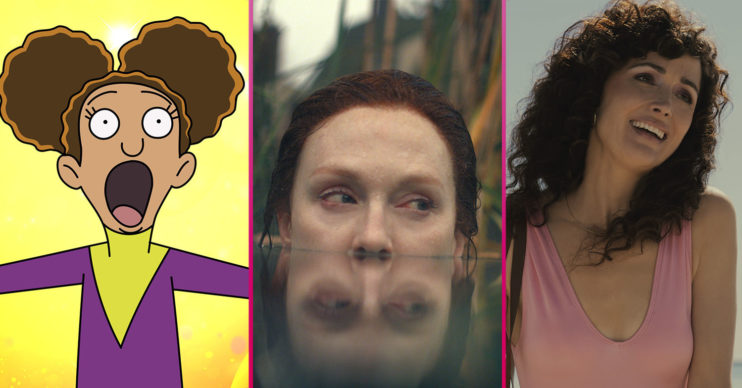 Apple TV+ in June 2021: Everything arriving from Lisey’s Story to Physical

Women are leading the way in this month's new shows.

Apple TV+ in June 2021 is giving us everything, from a trip to the 80s to a brand new Stephen King thriller.

Hell, it’s even for new installments of a comedy cartoon musical, so there really is something for everyone.

So what releases are there to look forward to (and which shows still have some episodes to drop and keep us hooked in?)

Here’s everything that’s arriving or being updated this month.

In this limited series Stephen King adaptation, Julianne Moore stars as Lisey Landon – who is grieving the death of her husband, famous novelist Scott Landon.

However, two years on, a series of unsettling events causes Lisey to face memories of her marriage to Scott that she has deliberately blocked out of her mind.

Clive Owen stars as her husband, Scott, in the flashbacks, while Joan Allen, Jennifer Jason Leigh, and Dane DeHaan complete the cast.

The series is also written by King himself.

Another mystery, Home Before Dark is inspired by the reporting of a young investigative journalist, Hilde Lysiak.

When a mysterious explosion hits a local farm, reporter Hilde Lisko (Prince) begins an investigation that will lead her to fight a powerful and influential corporation.

However, soon the health of her family and Erie Harbor lie in the balance.

Set in San Diego during the 1980s, Physical is a dark comedy following Rose Byrne as Sheila, a housewife whose life changes forever after discovering the world of aerobics.

Soon, she starts her own business making exercise tapes, giving her a new sense of empowerment as she becomes a lifestyle guru.

However, the problem is balancing this with her home life with her ambitious and problematic husband.

The first three episodes air on June 18th, and then drop weekly.

Following the life of the Tillerman family, Central Park follows the group as they live and care for the iconic New York landmark.

However, the younger members of the family are also dealing with adolescence and the trouble it brings – and then there’s Bitsy, who wants to claim Central Park as her own.

Paige continues to chase down the Mayor’s corruption story, and Owen juggles managing the park, his staff, and his family all with a smile on his face.

The first three episodes air on June 25th, and then drop weekly.

What shows are getting new episodes on Apple TV+ in June?

Jason and Nikki’s fight for adoption continues in this heartwarming British sitcom about what it means to have a family.

Having been approved by the adoption panel they now find that matching with a child is not as straightforward as they had hoped.

After meeting a young seven-year-old named Princess, the pair now have to argue their case that they’re the ones that should take her in as their own.

However, their plans are derailed by a last-minute trip to Cornwall following a death in the family.

With quarantine over, season two finds everyone back in the office attempting to build upon the game’s success by launching an expansion.

That’s if they can figure out how the game is going to work.

In this week’s episode, Please Sign Here, Mythic Quest employees cause havoc by refusing to sign a simple workplace assessment.

All titles are available on Apple TV+ in June.