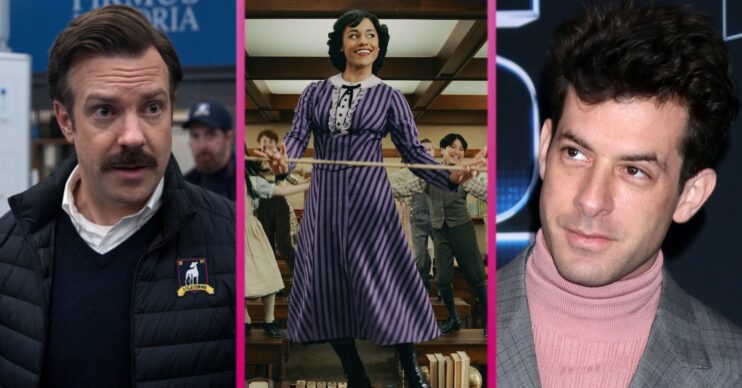 Apple TV+ in July 2021: Everything arriving from Ted Lasso to Schmigadoon!

Whether you're up for a feelgood sitcom or a music deep-dive, Apple has you covered

Apple TV+ in July has something for everyone – from an award-winning sitcom that will melt your heart to an all-singing, all-dancing tribute to classic musicals.

If you’re up for something more serious, there’s even a couple of deep dives into the inner workings of some musical icons.

As Apple’s original content continues to grow in popularity, the team are making sure it’s all quality over quantity, resulting in some absolute must-watch telly.

Here’s everything that’s coming up this month.

What TV series are coming to Apple TV+ in July?

A sitcom parody of Hollywood Golden Age musicals, Schmigadoon! tracks Melissa and Josh – a couple at a crossroads in their romance after four years.

Heading on a backpacking trip intended to add some spark to their relationship, the pair stumble upon the magical town of Schmigadoon.

Unfortunately, they then discover they can’t leave until they find true love.

After sweeping awards season, Jason Sudeikis is back as the heartwarming Ted Lasso.

Dealing with the aftermath of being relegated, AFC Richmond needs his positive attitude more than ever.

Thankfully, he’s got it in abundance.

But will the biscuit-making sweetheart manage to bring the team back to the top?

Mark Ronson reveals the secrets to your musical favourites in this new series.

Basically, he’s on the hunt for the perfect sound.

Ronson explores ‘the intersection of technology and musical innovation’ in the series about some of the world’s greatest tracks.

What shows are getting new episodes?

Following the life of the Tillerman family, Central Park follows the group as they live and care for the iconic New York landmark.

However, the younger members of the family are also dealing with adolescence and the trouble it brings – and then there’s Bitsy, who wants to claim Central Park as her own.

Set in San Diego during the 1980s, Physical is a dark comedy following Rose Byrne as Sheila, a housewife whose life changes forever after discovering the world of aerobics.

Soon, she starts her own business making exercise tapes, giving her a new sense of empowerment as she becomes a lifestyle guru.

This month, Sheila is finding her feet in aerobics, while juggling her husband’s political campaign.

Can she manage it?

All titles are available Apple TV+ this July.