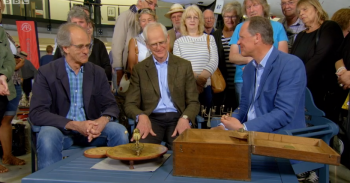 Antiques Roadshow viewers stunned as unlikely object is valued at £50,000

Two brothers on Antiques Roadshow were stunned when a fascinating object they brought along was given a five-figure value by the experts.

The pair featured with a plain wooden box containing an intricate clockwork model of the solar system.

Expert Ben Wright explained that the “innocuous” box actually contained a tellurion and a planetarium, which together made an orrery.

The term, Ben revealed, came from the fourth Earl of Orrery, who commissioned a clockmaker to create a planetarium for him in the 18th Century.

Demonstrating how the model moved, Ben said: “What we have is the moon running round the earth.”

When asked where they got it, the brothers told him: “It belonged to our father and he bought it probably around immediately after the war.”

They said they played with it occasionally when they were boys and joked it was a “miracle” it survived.

Shedding light on the history of the object, Ben said this particular orrery was crafted by a scientific instrument maker called Jones.

What set it apart from the other that occasionally showed up at auction, Ben said, was the fact it was in full working order and came with its original papers, which were in good condition.

Ben asked the brothers if they had any idea of its value and they admitted they didn’t .

It was a beautiful antique but its value nevertheless caused viewers’ jaws to drop.

Taking to Twitter, one wrote: “£50k? That’s worth more than the Concorde plane behind them.”

Another said: “I’ve just let out a very loud and probably unnecessary WHAT!!?? When two of the most beautiful orreries I have seen were valued at 50k!”

A third joked: “Was thinking of buying the four-year-old a planetarium for her obsession with the solar system but don’t think I’ll bother!”

That's worth more than the Concorde plane behind them #AntiquesRoadshow

I’ve just let out a very loud and probably unnecessary WHAT!!?? When 2 if the most beautiful orreries I have seen were valued at 50k!! #AntiquesRoadshow

Was thinking of buying the 4 year old a planetarium for her obsession with the solar system but don't think I'll bother! #£50k#AntiquesRoadshow https://t.co/dOAPM5ZdVr

What did you think of the brothers’ orrery? Leave us a comment on our Facebook page @EntertainmentDailyFix and let us know.