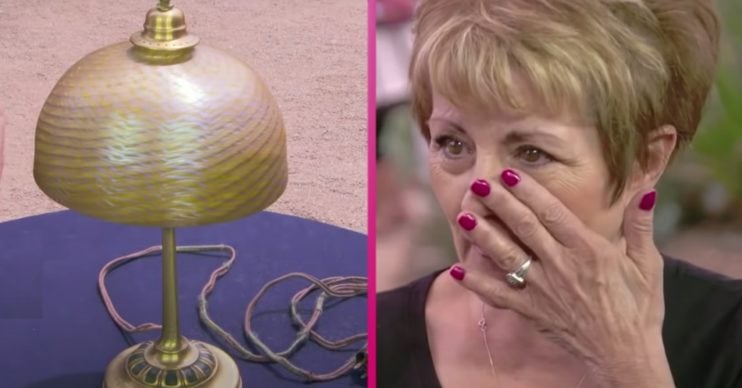 Plus more huge surprises from the Antiques Roadshow

Antiques Roadshow saw an ‘ugly’ lamp valued at thousands, causing the owner to break down.

She was shocked to be informed the worn item was worth a small fortune… especially as it cost her nothing!

That’s because the show guest had picked the light up when a neighbour was clearing out their house.

The light fitting was valued on a recent episode of the US version of the show.

What happened with the ‘ugly lamp’ on Antiques Roadshow?

“And you have a gilded-bronze base with the enamel design around the foot.

“And then what we call a damascene blown-glass shade with wonderful iridescence on the outside.

“These came in several different colours, and there’s sort of a hierarchy of value in the colours. This one is the caramel colour.

“Something like this is very desirable because it’s intact, and the shade is one of the better colours. This comes off.”

How the Antiques Roadshow guest acquired the ‘ugly’ lamp

The guest went on to explain how she obtained the lamp

She said: “I was taking a walk in the morning.

“And I got about four houses down from where I live, and there was a sign that said ‘free’.

“So I walked by it the first day and then the second day. I thought about it again. And I thought, ‘Well, I’ll take this. It’s pretty ugly, but I can give it to somebody… so I’ll just take it.'”

The guest was understandably emotional at the news.

Wiping away a tear, she sighed: “Oh my God!”

Over here in the UK, the biggest valuation ever given to an item was a whopping £1million. That was the valuation given to the final design maquette of the Angel of the North during an episode on BBC One in 2008.

But here are three more huge surprises that have aired on the show.

1) Antiques Roadshow expert Geoffrey Munn declared he was “nearly fainting” when presented with a bracelet from the 1920s in 2016. The owner was similarly emotional and tearful when told the Art Deco piece of jewellery was worth £150,000.

2) A painting by Sir William Orpen of his mistress enchanted expert Rupert Maas, who said it was worth £250,000. The shocked owner said at the recording in London: “I’m completely gobsmacked. It’s worth more than my house – what on earth am I going to do about it?”

3) Even presenter Fiona Bruce has caused a stir with a discovery on the show. She spotted a painting during a recording n 2013 she thought may be a genuine Van Dyck. Bought for £400 in 1992 by a priest, it was duly given a valuation of £400,000. What a turn up!

4) Expert Alastair Dickenson was in raptures in 2011 when presented with a host of stirrup cups. These items are cups that were presented to guests for a final drink as they departed. “Bulls happen to be one of the rarest forms of stirrup cup you can get,” he said Alastair. “For a set, there’s not going to be much change left out of £150,000.” He also couldn’t believe just how many were brought in for him to inspect. A thrilled Alistair added: “This is possibly one of the best days I’ve ever had on any Antiques Roadshow.”

5) Furniture guru Lennox Cato was gobsmacked to cast his eye over one of the most expensive items brought on to the show in 2011. The 421-drawer apothecary desk, made of Cuban mahogany wood cabinet, was valued at £200,000. The expert could barely believe the “absolutely stunning” was presented to him to look over.

6) Back in 2001, during an episode filmed in Bridgend, the owner of a Gold Leica 2 Luxus Camera admitted he didn’t feel his vintage camera was all that special. He’d owned it for 45 years, after all. However, it was revealed that only four were made the model. Given a valuation of a relatively modest £5,000 – still a sum to make anyone snap happy – it actually sold a few years later for £320,000!

7) Halt In The Desert, a painting by 19th-Century artist Richard Dadd, had been lost since 1857. But thanks to the Antiques Roadshow, it turned up again after over 120 years in the wilderness. It turned up in Devon, where a couple had had in their loft for years and had no idea about its background. An episode in 1986 from Barnstaple saw it valued at £100,000 – the highest valuation on the show at that point. It was later sold to the British Museum!