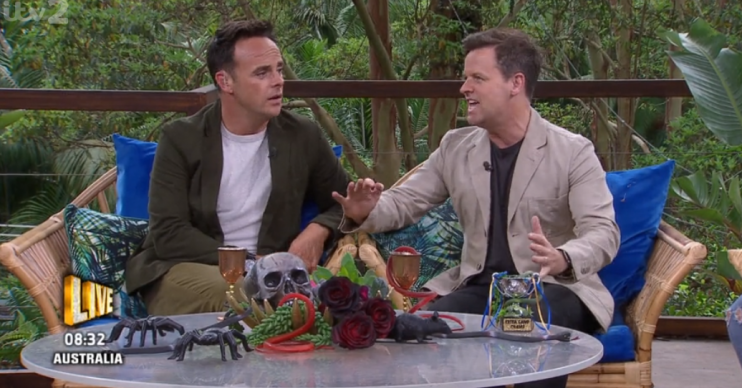 One campmate will be dumped tonight!

TV duo Ant McPartlin and Dec Donnelly have revealed who they think will leave I’m A Celebrity first.

The first campmate will be voted off tonight (November 29) and the stars will be fighting for immunity in tonight’s Reckoning trials.

During Thursday night’s episode of spin-off programme Extra Camp, Ant and Dec said they think former EastEnders actor Cliff Parisi is at risk of being voted off.

When asked who they think could potentially leave the jungle first, Ant said: “I think it is fair to say that Cliff is probably in danger because he’s not doing a lot.”

Dec added: “I think he is struggling a bit with his energy levels and he’s not been in the show a huge amount.”

I think he is struggling a bit and his energy levels have dropped and he’s not been in the show a huge amount.

Six of this year’s 12 campmates are currently ‘cursed’ after losing their Reckoning trials, meaning they also have been living off rice and beans.

At the end of last night’s show, Ant told the campmates: “Currently, six of you are cursed. But that could be about to change with another day of reckonings.

“Yesterday was just about food, but today is also about immunity from the first public vote off.”

Dec added: “For those who are already cursed, there will be a chance to free yourselves.

“For those you are currently free, you’ll be fighting to stay that way.”

Tonight, the campmates will take on another Reckoning trial to try and win food and immunity.

Bookies have already predicted which famous face could leave the jungle first.

According to Ladbrokes, Andrew and Adele are most likely to be voted off with odds at 6/4 and 7/4 respectively.

Spokesperson Jessica O’Reilly told The Sun: “Andrew’s failed to really create a decent rapport with his camp mates, let alone the public, and the odds suggest he’ll be the first celebrity to be voted out of the jungle.”

Who do you think will leave I’m A Celebrity tonight? Leave us a comment on our Facebook page @EntertainmentDailyFix and let us know what you think!