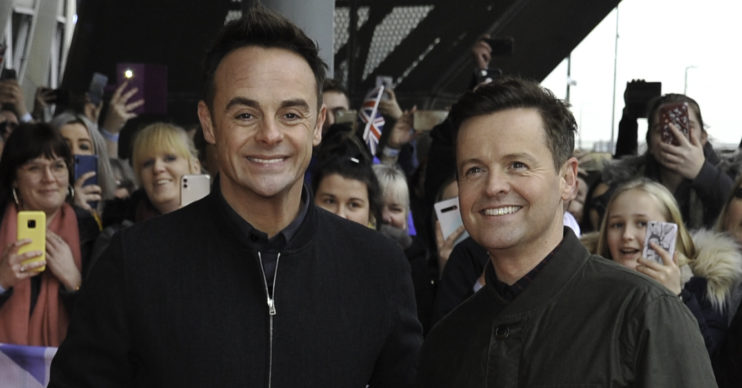 Looking good for the semi-finals!

Ant and Dec have been pictured wearing Britain’s Got Talent-branded face coverings.

The cheeky Geordie presenting pair, both 44, took to Instagram to show off the masks ahead of the BGT semi-finals on Saturday (September 5).

Back to work on #bgt!

What are Ant and Dec wearing?

Ant and Dec showed off their masks to followers as the semi-finals loom into view.

They captioned an image, which saw them wearing suits and the masks, with the message: “Back to work on #bgt!”

Soon, an army of fans responded to the lads’ new look.

Another said: “Now this is cool!!”

Who will replace Simon for the finals?

Ant and Dec’s appearance on social media to publicise the show has clearly raised excitement levels.

Judges Simon Cowell, Amanda Holden and David Walliams returned on Sunday in a pre-recorded taster that saw them choose the semi-finalists.

However, there will be one major difference in the upcoming live shows – Simon, 60, will be missing after breaking his back earlier on this month.

As a result, Diversity dancer and Dancing On Ice judge Ashley Banjo will take Simon’s place on the panel.

Simon told The Sun: “Ashley will be a fantastic addition to the panel. He knows the power of the show and the responsibility of it.

Ant and Dec had showdown talks with Simon

The lads may be back at work on BGT, but reports surfaced last week claiming that the pair were close to quitting the show.

In their new autobiography, Ant revealed that the pair had showdown talks with Simon about their future.

He said: “It was on a trip to America, in 2012, where we had to have a serious conversation with Simon.

“The previous series of BGT had been especially tricky for us two.”

He said that they had ‘hardly featured at all’ during some episodes.

In addition, Dec said: “The experience left us feeling like we were being sidelined.

“We’d been to see the bosses at ITV and told them we were strongly considering leaving BGT.”

Have you missed BGT? Leave us a comment on our Facebook page @EntertainmentDailyFix and let us know.