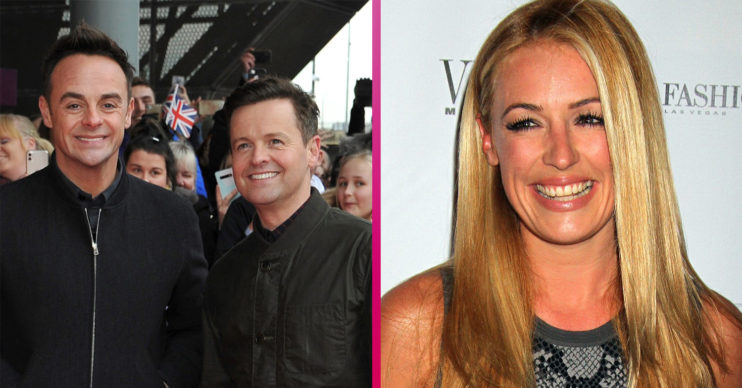 The former hosts recently reunited for a one-off special

Ant McPartlin and Dec Donnelly were left in tears during their emotional SMTV Live reunion with Cat Deeley.

The trio recently reunited for the 20th anniversary of the TV show, which is set to be released later this year.

However, Cat confessed they became very emotional as they revisited the rebuilt studio.

What happened at the SMTV reunion?

Speaking to Chris Moyles on Radio X, Cat recalled the moment the former hosts reunited for the first time.

She said: “We went back to the studio where we did it. They rebuilt the set. We all cried.

We all have a bit of a cry.

“I walked in and they were doing their interview and Dec was crying and I was like ‘OK you’re crying!’ and then at the end of my interview I was like ‘waaah!’.

“We all have a bit of a cry, we take the mickey out of each other, it’s very, very, very cute.”

Read more: Denise Welch in tears as she takes break from Twitter after coronavirus row with Piers Morgan

What should fans expect from the SMTV reunion?

The one-off episode will celebrate Ant and Dec’s 30 years in showbiz.

An insider previously told The Sun: “SMTV was such a huge part of Ant and Dec’s career, they knew they wanted to mark it in some way.”

H recently revealed he and Claire had been busy filming for the special while presenting on BBC Radio Wales.

Speaking to Claire on the show, the Steps singer said: “We did some filming yesterday for SMTV.

“They are doing a celebration for SMTV and I think mainly because both of us presented it.”

He added: “It was lovely, wasn’t it? We were watching clips of performances and our sketches.”