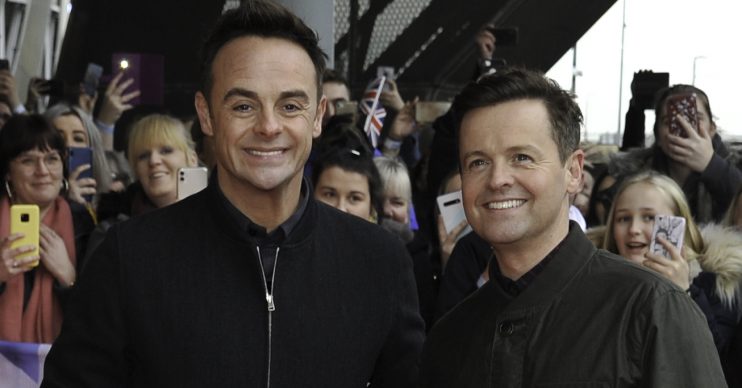 Show could become a casualty of coronavirus

Telly favourites Ant and Dec have revealed that this weekend’s Saturday Night Takeaway could be their last.

They told hosts Eamonn Holmes and Ruth Langsford they were busy rehearsing for the show in their empty studio due to the coronavirus outbreak.

Ant revealed: “We wanted to do the show just to put a smile on other people’s faces as we might not be able to do another one.”

He added: “We don’t know. We just want to get on air, have some fun and hope you all enjoy it.”

Ant and Dec revealed that amid the coronavirus pandemic they told their crew it was their decision to come into work – and they could stay at home if they wanted.

The duo admitted that Saturday’s show will be “different”.

“It’s going to be strange, different,” Dec revealed. “When we run down the stairs, it’ll be empty, but we’re probably still going to do that.”

“We’ll still do what we normally do but without an audience,” Ant confirmed.

“The seats will all be empty but we’ll go on with the show,” said Dec.

Read more: Eamonn Holmes branded “idiotic” as he tells This Morning viewers to “live on takeaways” amid COVID-19 crisis

Ant and Dec said, despite the absence of their studio audience, the show is “jam-packed” with features.

They said Bradley Walsh‘s long-awaited Undercover is due to air and it promises to be the funniest one yet.

Ant revealed: “We got him 15 years ago and he was the angriest celebrity we’ve ever pranked when he found out it was us at the end – he stormed off and took a lot of convincing to get him to come back and talk to us.”

He added: “Since that day we’ve thought we’ve got to get him again, so it’s been three years in the planning, we got him on the set of The Chase and it was an episode of The Chase he’ll never forget,” he said.

Cutting to a clip from tomorrow’s show, the cheeky pair were seen emptying giant bins full of bottles into a dustcart parked outside the studio.

“It’s very funny. Whether he’ll find it funny or not we’ll find out tomorrow,” Ant quipped.

Dec added: “He’s so easy to wind up. It’s a good one tomorrow night – you won’t be disappointed.”

The boys also revealed that they need your help for the End Of The Show Show.

Dec revealed that Olly Murs would be in the studio singing his his Dance With Me Tonight – and the boys want viewers to do just that.

“We want the whole nation to dance. Just because you’re in self isolation or staying at home out of choice, we want you to film yourself dancing and we want to put you up on the big screens in our End Of The Show Show,” Dec said.

He added: “Film yourself for a minute in landscape, go to our website and you can send us your videos and you can be in the show tomorrow night.”

Tune in to ITV at 7pm on Saturday March 21 to watch the show.