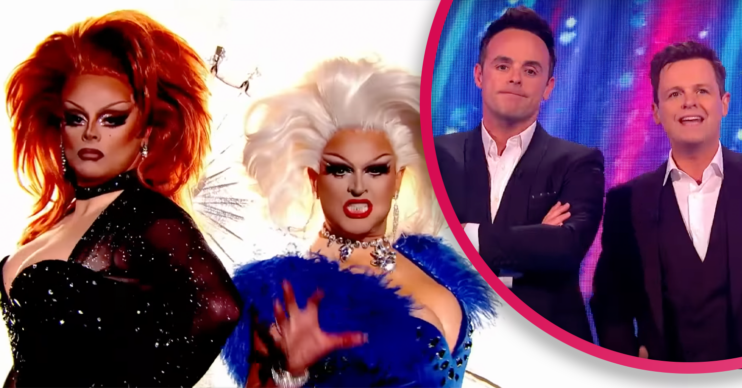 The best End of the Show Show yet, some fans said

Saturday Night Takeaway was back with a bang for a new series last night (February 19).

And it was widely agreed on social media that the End of the Show Show was the boys’ best yet.

However, some fans of the show have predicted complaints to the broadcasting regular Ofcom after Ant and Dec‘s performance.

What did Saturday Night Takeaway fans say about Ant and Dec?

The End of the Show Show saw the boys dress up in full drag to perform with the winners of RuPaul’s Drag Race with Ru himself acting as the night’s guest announcer.

Read more: Ant McPartlin on his decision to reconnect with estranged dad who left hi as a child

One grinch posted a picture of Ant and Dec in drag and declared: “How far these two have fallen.”

Another said: “Saturday Night Takeaway first show completely ruined by having a load of sick so-called MEN playing at being WOMEN, absolutely disgusting, on a family show.

“What the [bleep] is wrong with these people.”

It was then that predictions of complaints to Ofcom started.

One said: “You just know some whingy sad act is writing to Ofcom about this. I LOVED IT.”

And they weren’t wrong!

“Can’t see The End of the Show Show going down very well for some viewers, I’m guessing a few complaints will be made by the viewers to Ofcom. Not a very good start for Ant and Dec in my opinion,” said one.

Another tweeted Ofcom to check if it was ready for the predicted onslaught of complaints.

“And I thought #Diversity’s BLM dance was going to be the biggest trigger of all time on ITV 😂 @Ofcom you ready?” asked one.

Another agreed that the “Ofcom warriors are going to implode at that”.

Ant and Dec were back with a bang, dressing in full drag to perform at the end of the show.

The show’s viewers loved it, with fans in their thousands taking to Twitter to admit just how much they loved it – and how “jealous” they were of how good Ant and Dec looked in heels.

Read more: Ant McPartlin holds back tears as he heads back to filming on BGT with Declan Donnelly

One said: “The fact that I am #fangirling over you both I now think I have fallen in love with #TheAngelsOfTheNorth you made my night complete.

“What a stunning pair of legs you both have I’m #jealous & all in heels,” said one.