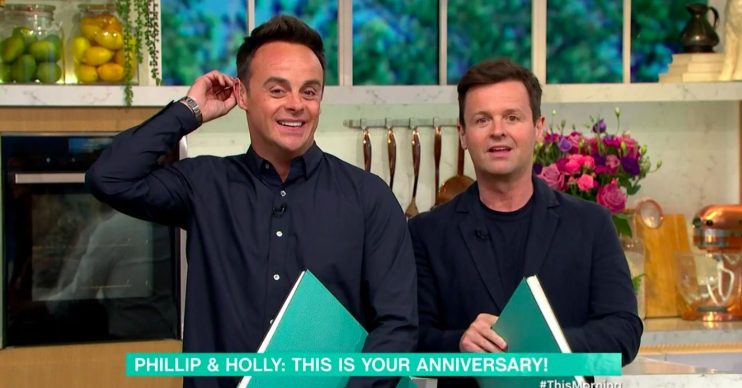 Ant and Dec take over presenting duties on This Morning

They gatecrashed the show

Presenters Ant McPartlin and Declan Donnelly caused a bit of a stir on This Morning earlier today as they gatecrashed the show and stunned hosts Holly Willoughby and Phillip Schofield.

Holly was in complete shock as Ant and her former I’m A Celebrity… Get Me Out Of Here! co-host, Dec, arrived in person as she struggled to say anything coherent.

Ant explained: “We have stormed the show and taken over the reins as we look back at ten years of one of the best British partnerships on television.”

Dec then quipped: “One of. Other partnerships are available.”

They then revealed that a whole host of This Morning friends were waiting in the studio to help them celebrate.

These friends included the likes of Vanessa Feltz and Dr. Ranj, and Ant and Dec then took over hosting duties as Holly and Phil entered the studio following the ad break, and it was clear that they couldn’t believe what was happening.

The Geordie duo them introduced a video montage of Holly and Phil’s ten years hosting the ITV programme, in which brief clips of the presenters’ best moments from the last ten years were shown.

This was followed up with Ant and Dec introducing some of This Morning’s most memorable guests from the last ten years.

These guests included penis artist Pricasso who had made a very special painting for Phil and Holly’s landmark anniversary.

There was also a special message from Phil and Holly’s good friend and regular guest, Italian chef Gino D’Acampo, who said: “Phillip and Holly, congratulations, 10 years together.

“I remember like it was yesterday, Holly you were nervous like a puppy and now look – the Queen of British television.”

Ant and Dec couldn’t help themselves from showing the brilliant moment when Phil and Holly presented This Morning obviously hungover after having spent the whole previous night celebration their National Television Awards win back in 2016.