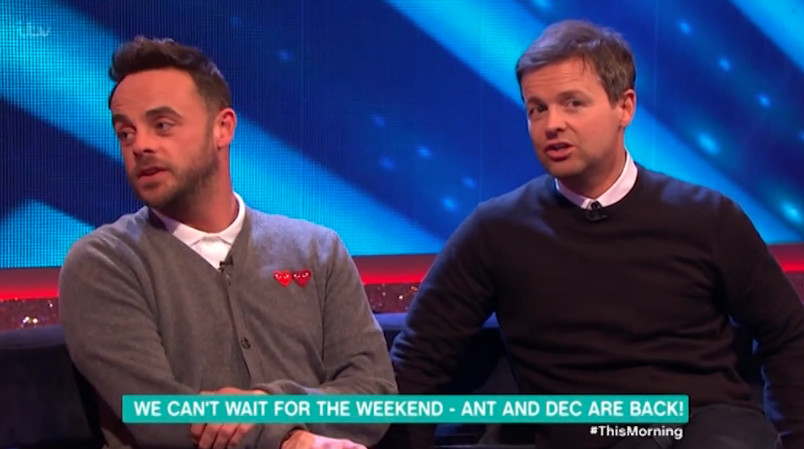 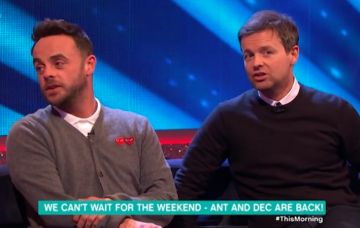 Saturday Night Takeaway hosts Ant and Dec have admitted to accidentally crashing monster trucks into walls as part of a test run for a new show challenge.

Both lads are no doubt keen to make a winning start to their Ant V Dec challenge series during tomorrow night’s show, when Takeaway returns for a 15th series on ITV.

However, fans will hope the Geordie pair don’t go too hard when putting pedal to the metal for the “dangerous” stunt after going through some expensive mishaps while practising.

Speaking to Ruth Langsford and Eamonn Holmes on This Morning, Dec revealed how they experienced ‘bad’ smashes.

“We’ve got a monster truck race tomorrow,” he said. “That is big and dangerous. It’s huge.”

He continued: “We had to give it a go earlier and we both crashed quite badly earlier today.

Ant laughed: “Each truck costs a couple of hundred thousand pounds, so no more crashes!”

Earlier in the interview, Ruth gave the pair a bit of a telling off after traffic mayhem caused by preparations for the new series left her unable to find a parking space.

“I knew you were back because I couldn’t get parked,” she teased the Geordie pair.

“All of your [production] trucks were in the way and I had to drag my car across the car park.”

Dec laughed: “We had the same problem yesterday with all of our trucks!

“I thought: ‘Who is this getting in the way?’ It was chaos but it was just us!”

Are you excited by the return of Saturday Night Takeaway? Let us know by commenting on our Facebook page @EntertainmentDailyFix.