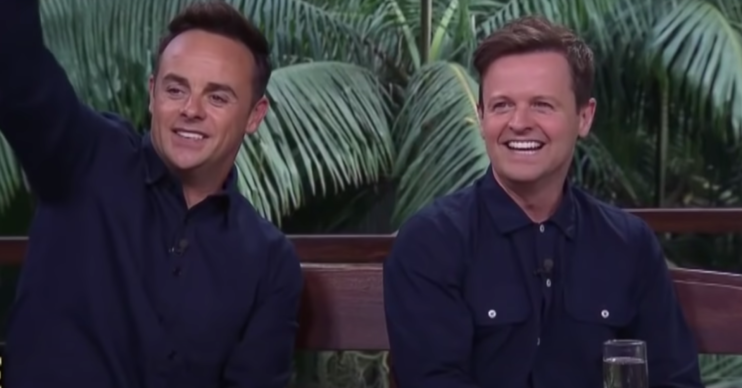 Ant and Dec initially thought I’m A Celebrity… Get Me Out Of Here! sounded ‘terrible’

The presenting duo weren't keen on the show at first

Ant and Dec say they thought I’m A Celebrity… Get Me Out of Here! sounded ‘terrible’ when they were first approached about the ITV show.

But it wasn’t the format they had the problem with, but rather its title.

“And we were like, ‘Well, this all sounds good, a bit like Big Brother and it’s a bit like other things, and they’re putting it all together. What’s it called?’

Ant and Dec on ‘awful’ I’m A Celebrity

Declan Donnelly, 44, added: “We both looked at each other and we were like, ‘Well that’s awful, isn’t it?'”

Ant confirmed: “What a terrible title. We were like, ‘Yeah we’ll do it, but the title will change, obviously’.

The pair appeared on My Life As A Mixtape and promoted their upcoming book Once Upon A Tyne: Celebrating 30 years together on telly.

I’m A Celebrity one of most-watched shows on TV

Read more: Piers Morgan hits back at viewers who thinks he wants another lockdown for ratings

“We were halfway through the series. We didn’t really know what we were doing.

“Coldplay had just released their second album, A Rush Of Blood To The Head, and this was one of the tracks on it.

I’m A Celebrity moves from Australia to Wales

“And in the middle of it there was a line that really summed up how we were feeling — ‘I was scared, I was scared, tired and underprepared’.”

However, the duo could end up feeling similarly on this year’s I’m A Celebrity.

As for the first time in its almost 20 year history it will be filmed in the UK.

At a castle built on historical grounds in Wales no less.

Due to coronavirus restrictions ITV had to relocate the series to Gwrych Castle in Abergele, North Wales.

Here Ant and Dec and a slew of celebs will film in freezing temperatures.

The roofless castle will be extremely cold this November – with an average of 8 degrees celsius.

And it is also said to be haunted – so much so that paranormal activities could easily be on the cards for the unsuspecting celebs.