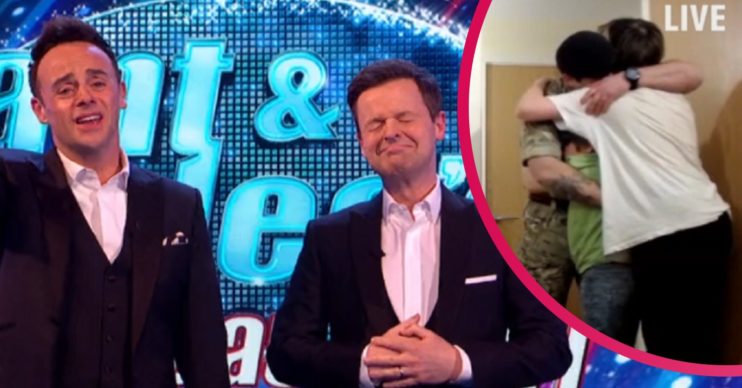 ITV viewers were in bits

Ant and Dec show Saturday Night Takeaway had viewers in tears last night as it reunited an army officer with his family.

During yesterday’s (Saturday, April 3) episode of the popular ITV programme, hosts Ant McPartlin and Dec Donnelly told brothers Corey and Zach that someone special was delivering their boarding passes.

Earlier in the show, the family won a holiday.

What did Ant and Dec say to the family on Saturday Night Takeaway?

Ant said on SNT: “We’re going back to Corey and Zach now… we forgot to give them their boarding pass earlier… sorry about that boys.”

Dec said: “In fact, we’re going to give it to you now. In fact, we’re not going to do it, someone very special is going to bring your boarding pass in for you. Here he is…”

The door to the family’s living room then opened – and in walked in the boys’ dad, who had returned from being away with the army. They hadn’t seen him since August last year.

Both youngsters immediately jumped up and threw their arms around him.

Zach, the younger, remained holding on to his dad’s waist, sobbing audibly into his shirt.

On Twitter, the emotional moment had viewers “proper sobbing”.

One tweeted: “#SaturdayNightTakeaway that was so, so lovely, to see their dad walk in #Military.”

A second wrote, with a clapping emoji: “Awwww the two lads with their dad who has come back from army duty #SaturdayNightTakeaway.”

God love the little boy crying his eyes out with his dad.

Another said: “You know, I knew they were going to bring the dad in but still…FFS, proper sobbing here! #SaturdayNightTakeaway.”

A fourth viewer wrote with a crying emoji: “God love the little boy crying his eyes out with his dad #SaturdayNightTakeaway.”

Someone else said: “Choked up after watching the army dad returning home to surprise his family… #SaturdayNightTakeaway.”

You know I knew they were going to bring the dad in but still 😭😭😭😭😭 ffs proper sobbing here! #SaturdayNightTakeaway

Are you a fan of Ant and Dec and Saturday Night Takeaway? Leave us a comment on our Facebook page @EntertainmentDailyFix and let us know.