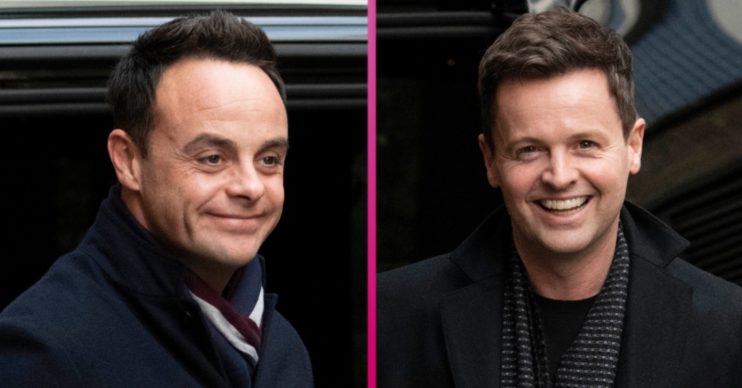 Ant and Dec are reportedly looking for new opportunities

Ant and Dec are looking to try their luck on streaming services like Netflix, according to reports.

The duo, both 44, are reportedly feeling out new opportunities on other platforms.

What are Ant and Dec doing with Netflix?

The Sun reports that the I’m A Celebrity and Britain’s Got Talent stars – despite being ‘tied up’ on a presenting deal with ITV – are looking to get more into producing.

A source said: “Ant and Dec have dominated our screens for years but now they’d like to have a shot working with the streaming giants – including Netflix.

“They’re tied up in a mega-money deal with ITV so won’t be appearing on screen but want their production company to push into the market.

“There are endless opportunities for their old formats which could end up being put onto streaming platforms.”

They’d like to have a shot working with the streaming giants – including Netflix.

The newspaper says that the Geordie pals own the back catalogue to their hit show such as Byker Grove and SMTV: Live.

It’s also said that they have ‘exciting projects’ they want to work on.

Will Ant and Dec be back on I’m A Celebrity this year?

Ant and Dec are all set to return this winter in the new series of I’m A Celebrity on ITV.

The 20th series will take place in Wales this year because of the coronavirus pandemic.

It’s usually filmed in Australia, but this year ITV has confirmed it will be closer to home. An insider told The Sun: “Planning the jungle – as with most other shows – has been very difficult as producers navigate a dynamic and fast-changing situation.”

Ant and Dec ‘branching out’

It was recently announced that the pair were due to return to the BBC for the first time in years.

They’re going to appear on BBC Radio 2 show, My Life As A Mixtape.

The series asks celebs to choose tracks that have shaped their lives.

Read more: Ant and Dec surprise little boy who has raised over £1 million for hospital that saved his life

The pair first met on the set of kids’ show Byker Grove. They went on to present ITV Saturday-morning kids show SMTV: Live alongside Cat Deeley.

Ant and Dec are reportedly reuniting with Cat for a one-off special to celebrate 30 years in showbiz.