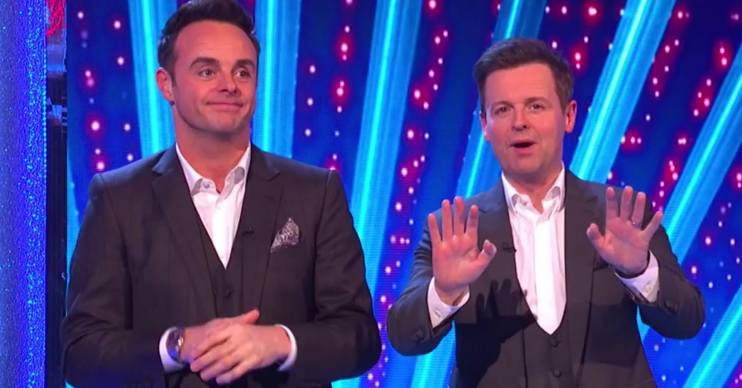 Viewers were amused by the moment

TV’s Ant McPartlin and Declan Donnelly had to say sorry after a woman let slip a four-letter word following an impromptu striptease on Saturday Night Takeaway.

The cheeky presenters had arranged for the lady’s husband to go on stage and take part in the steamy Magic Mike show in London, as a saucy surprise.

Their cunning plan worked as the lady, named Lucy, looked utterly stunned as she spotted her man on stage, bare-chested and strutting his stuff, and could be seen mouthing the f-word.

And the shock clearly hadn’t subsided by the time presenter Stephen Mulhern, who was at the club, caught up with her for her reaction.

Turning the air blue, Lucy bellowed into the microphone: “What the [expletive] is going on?”

Mulhern could barely contain his giggles as he exclaimed: “Oooooh,” before turning to the camera and apologising if viewers had heard the expletive.

He then swiftly turned his attention to the other woman whose partner had joined in the strip show.

Hosts Ant and Dec also said sorry, with Dec telling viewers: “Apologies again if you were offended by the language or any of the lip-reading there.

“What we can say, two hunky men and an excitable audience it’s a fantastic formula isn’t it?”

“That bewildered woman swearing live on Saturday Night Takeaway has cheered me right up,” tweeted one tickled viewer.

“Massive fan of the woman on Saturday Night Takeaway dropping the F-bomb live on primetime Saturday night TV,” laughed another.

“The lady who swore on Saturday Night Takeaway… hilarious,” posted another.

It isn’t the first time the family show has been in the headlines of late.

Earlier this month some viewers complained to broadcasting watchdog Ofcom after the Pussycat Dolls served up a particularly racy performance on the show, which saw Ant and Dec taking part and stripping to their underwear.