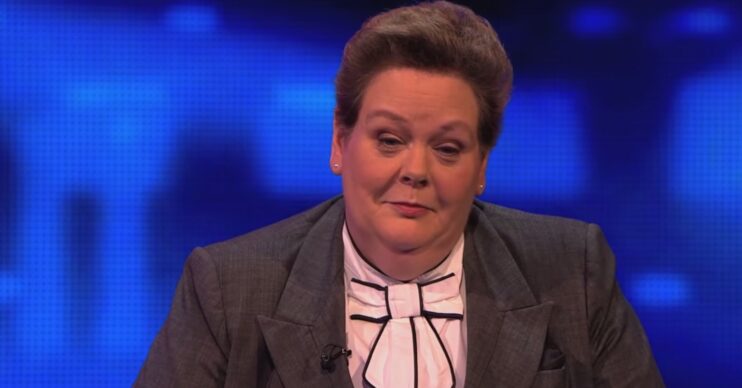 He needed to raise his game!

After banking an impressive £7000 in the cash builder, Edwin was the second contestant to stand up on the hotspot to take on ‘The Governess”.

He was dressed rather ‘dapper’ in shirt, tie and waistcoat.

Edwin told quizmaster Bradley that he was smartly dressed in case he faced the “lovely” Anne Hegerty, who is always suited and booted on The Chase.

While viewers thought he was flirting with Anne, 63, she wasn’t impressed and immediately pointed an issue with his ensemble.

She insisted the charm wouldn’t work as he “needed to have his top button up to flirt” with her.

Unfortunately, Edwin was caught by the quiz genius and didn’t make the final chase.

Before Edwin said goodbye to Anne, quiz host Bradley couldn’t help but joke about the pair’s flirty banter and joked it was the reason the contestant failed to beat Anne.

He said: “You pandered to Anne’s advances. Instead of being you – she trapped you like a fly in a Venus fly trap,” he joked as Anne smiled.

And, it seems Anne is quite fond of former Corrie star Bradley as, in an interview with Yours magazine, she spoke of her admiration for the star and worries he might give himself a heart attack.

She admitted: “I’m always kind of in awe of Brad. I think he’s such a professional and absolutely delightful. I admire him enormously.

“I once said to Brad that I worry so much that he works too hard, and I’m afraid he’ll have a heart attack. And he just went, ‘Oh, but I love it.'”

Anne Hegerty – from The Chase to Weatherfield

Only last week on the show, The Governess admitted she’d love a part of Coronation Street.

Could you take on the Anne Hegerty on The Chase and win? Leave us a comment on our Facebook page @EntertainmentDailyFix and let us know what you think!