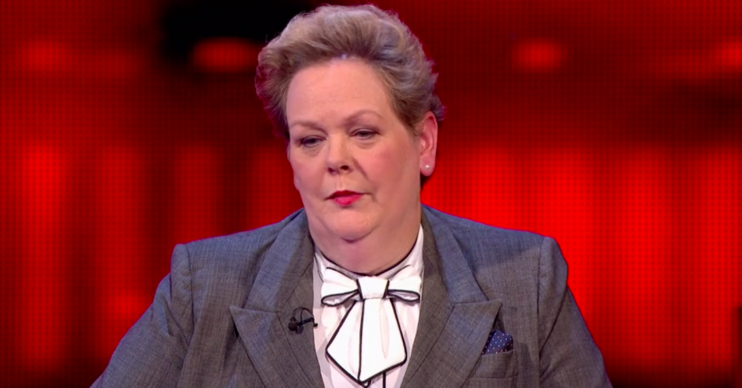 If we’ve learned anything about The Governess over the last few years, it’s that she doesn’t like to be wrong.

And one fan of The Chase found that out the hard way on Thursday, when he dared to query whether she’d answered a particular question correctly…

@anne_hegerty on tonight’s episode you answered the darts question “Barneveld” instead of “van Barneveld”. Pretty surprised Bradley didn’t pull that up as technically incorrect.

The teatime quiz show, hosted by Bradley Walsh, passed without incident, but Anne Hegerty got into a Twitter spat afterwards, when a viewer asked her about one particular question.

He wrote: “@anne_hegerty on tonight’s episode you answered the darts question ‘Barneveld’ instead of ‘van Barneveld’. Pretty surprised Bradley didn’t pull that up as technically incorrect.”

An apparently indignant Anne replied: “Tell me, was there a composer called Beethoven?” And he replied: “Not trying to cause an argument, just observing 😅.” The I’m A Celebrity… Get Me Out of Here! favourite tweeted again: “So, Beethoven?”

So you never call him Beethoven. OK, but many would, including Chase question verifiers.

Not giving in, the viewer responded: “There could be, but he/she wasn’t half as famous as the great van Beethoven.” You could almost hear the eye roll from across the internet, as Anne told him: “So you never call him Beethoven. OK, but many would, including Chase question verifiers.”

It wasn’t the only viewer who challenged Anne’s knowledge yesterday. Another tweeted the braniac to say: “I’ve just watched tonight’s @ITVChase and @anne_hegerty said the Duke & Duchess of Cambridge have 2 children and Bradley said it was correct! They have 3 children so how long ago was this recorded???”

Anne replied to explain: “2015, I believe. We’re on repeats till the end of the summer hols, as we are every summer.” The friendly fan responded to thank the TV star, saying: “Ah, that makes sense then, lol! Thought I was going mad 🙂 Thanks for replying!”

The outspoken Anne, who joined the quiz show back in 2010, enjoyed a big night out this week at the ITV summer party.

She retweeted a set of pictures from the event, shared by actor Crissy Rock, and joked: “A picture that doesn’t show my bra! I’m so proud!”

Some people will always find something to criticise. But it looks like The Governess won this round…

Do you agree with Anne or the viewer? Leave us a comment on our Facebook page @EntertainmentDailyFix and let us know what you think.