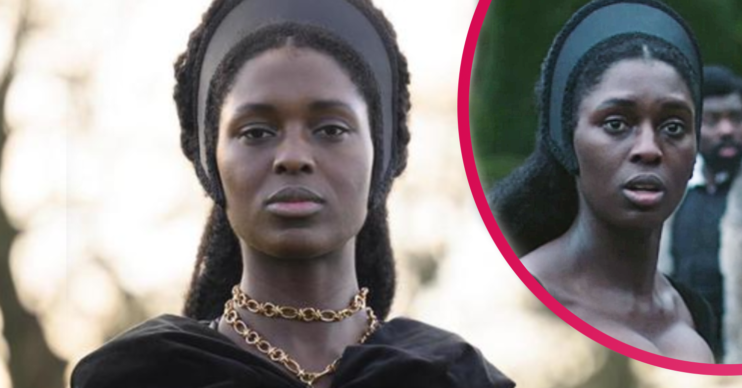 Some loved it, some thought it was 'awful'

However, while some viewers loved her as the English Tudor Queen, some did not.

Anne Boleyn reviews: What happened in the first episode?

The series tells the story of Anne, who was at the centre of intrigue in the 16th-century royal court.

Viewers saw Anne pregnant with her second child with Henry, and the court hoping for a son in order to take over his reign.

However, after her husband was seriously injured during a jousting accident, he seemed a changed person.

He started to flirt with maid of honour, Jane Seymour, and Anne began to feel the heat.

When she gave birth to her stillborn son, Henry looked as though he had disowned her.

With Anne feeling the pressure from the court and the paranoia caused by Henry’s developing relationship with Jane, she started to unravel.

And, as we all know, it’s a battle she ultimately lost. As well as her head.

#AnneBoleyn
This is truly awful.

I tried with #AnneBoleyn + I really liked #JodieTurnerSmith but it was just so wordy + dull, she was a great historical figure + this is what they came up with

How did viewers react to the episode?

The bold, fresh retelling of the story drew a mixed reaction from viewers.

In the first instance, many said that it was “awful” and “dull”.

One wrote on Twitter: “#AnneBoleyn This isn’t very good. They’ve made an interesting woman rather dull.”

I tried with #AnneBolyen and I really liked #JodieTurnerSmith but it was just so wordy and dull.

Another said: “I tried with #AnneBolyen and I really liked #JodieTurnerSmith but it was just so wordy and dull.

“She was a great historical figure and this is what they came up with.”

A third chuntered: “This version of Anne is so awful. It’s [a] miracle she wasn’t beheaded sooner.”

#AnneBoleyn is one of my favourite queens in history. Let this queen Jodie Turner-Smith reign over us. She is an amazing actress playing a iconic person in history. #Queen pic.twitter.com/sdMHjw7ruE

However, it wasn’t all bad and viewers praised Jodie for her superb performance.

One wrote: “#AnneBoleyn is one of my favourite Queens in history.

“Let this queen Jodie Turner-Smith reign over us. She is an amazing actress playing an iconic person in history. #Queen.”

Another said: “Quite enjoying #AnneBoleyn so far!!

“A little clunky on dialogue but Jodie Turner-Smith is absolutely rocking it!!”

Read more: What happened to Anne Boleyn? What is the famous Henry VIII wives rhyme?

“Worth watching for that alone. A lot of people moaning about historical accuracy, but failing to appreciate we have our most accurate Anne and George yet. #AnneBoleyn.”