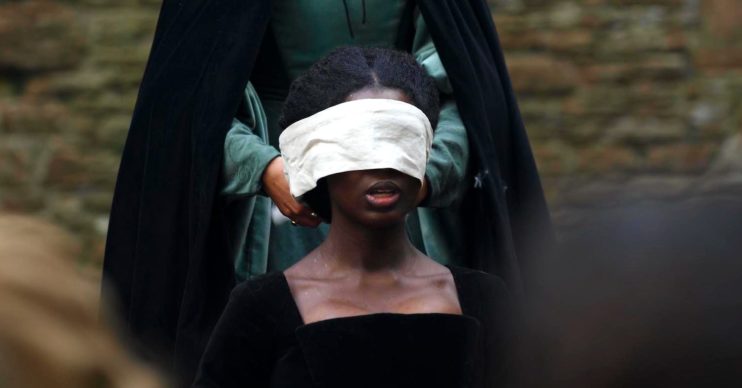 Some Channel 5 viewers were not happy

Anne Boleyn on came to an end on Channel 5 last night with its finale (June 4).

The critically acclaimed show has been a huge hit with viewers around the country.

Much acclaim has specifically been aimed at Jodie Turner-Smith’s portrayal of the misunderstood Queen Anne Boleyn.

However, last night some viewers were shocked by how graphic the re-telling of her infamous execution scene was.

Fans rushed to social media to share their distaste, with others devastated to see Anne’s story end so tragically.

What did fans say about the Anne Boleyn scene on Channel 5?

“#AnneBoleyn this is making me feel sick,” tweeted one viewer as she lost her head.

Another tweeted: “That was so barbaric. Poor Anne… Also the poor guys who were accused of being her lovers. The lute boy… Beheaded. Mad mad mad #AnneBoleyn.”

However, others slammed producers for failing to include Anne’s iconic speech before she was killed.

Anne famously gave a speech moments before she was beheaded insisting that she would not criticise her death sentence.

“How could they skip her scaffold speech?! #AnneBoleyn,” said one angry fan.

They missed an important part of Anne’s execution which was her speech to the people before hand,why miss that out #AnneBoleyn #channel5

A second tweeted: “When people talk about Anne Boleyn’s execution they always talk about her speech on the scaffold why was this not shown in the series #AnneBoleyn”.

While a third ranted: “They cut the speech They did not include Anne’s speech on the scaffold Absolutely fuming about this!”

“I’m a bit disappointed by them not including Anne’s speech!” said a fourth viewer.

The series told the story of Anne, who was at the centre of intrigue in the 16th-century royal court.

Viewers saw the iconic Queen fall pregnant with her second child with Henry, and the court hoping for a son in order to take over his reign.

However, following a serious injury during a jousting accident, Henry and Anne grew apart.

He started to flirt with her maid of honour, Jane Seymour, and Anne’s life would eventually spiral until she was sentenced to death.

Did you watch Anne Boleyn on Channel 5? Leave us a comment on our Facebook page @EntertainmentDailyFix and let us know what you thought.