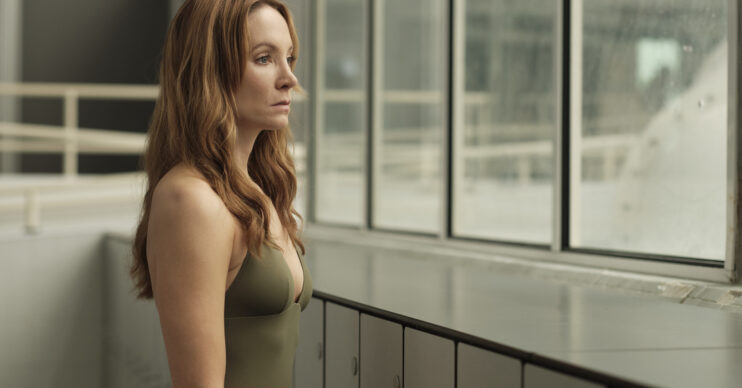 Angela Black episode 4 review: 5 questions that are hurting our brain

ITV is nowhere near wrapping up this thriller

Angela Black episode 4 delved further into the lead character’s past, revealing husband Olivier to be even more of an evil shit than we believed… but it’s left a whole load of questions we need answering…

1. What was the cause of Angela’s first psychosis?

So we discovered that some years earlier, Angela had decided that son Max was the Second Coming as a baby, convinced that, as the Son of God, he’d be able to walk on water.

Evidently she was admitted to psychiatric care after she chucked him into the local swimming pool – but what had pushed her to the breakdown? Was it her mother’s death, the incessant crying of her baby, post-natal depression… or the realisation of just how much Olivier was controlling her, when he kept her mum’s life-or-death calls secret?

2. Why was Olivier’s coercive control not spotted then?

It was obvious from his cool, calm, confident behaviour as he passed the baby monitor to Angela to make clear exactly what was expected of her that she had already been a victim for some time.

How did the conversation of him withholding details of her mother being terminally ill not come up in her therapy? And worse, if it did, why was it not delved into deeper – and Angela given the right support?

Read more: Who plays Olivier in Angela Black and why does he look familiar?

3. Is Quetiapine a real drug?

It is indeed. The anti-psychotic medication given to Angela is common-place in psychiatric units, where it’s used to treat some mood conditions such as schizophrenia, bipolar disorder, and sudden episodes of mania or depression associated with bipolar disorder.

It works by helping to restore the balance of certain natural neurotransmitters in the brain. According to research in the past five years, it can also be particularly effective in treating generalised anxiety disorder.

4. Why does Nazrin the care coordinator look so familiar?

She only made a fleeting appearance but Nazrin may well have made an impression on you – and that’s because she’s been on screen in another very high-profile role in recent weeks.

5. Has Angela just signed her own death certificate?

So, ‘Ed’ wasn’t her imagination – someone pretending to be Ed is very much alive and real. Very reassuring for Angela – but not for long. Presumably this lad isn’t about to find his conscience and agree to speak to police about colluding with Olivier.

It’s fair to conclude that he will either need to get her out of the way himself or own up to Olivier and let him do the dirty work. Although, that said, he may well be in fear of his own life if Olivier finds out he blew his cover so easily…

With two more episodes still to go, who knows where else the story could take us!

What’s your theory for the Angela Black conclusion? Leave us a comment on our Facebook page @EntertainmentDailyFix and let us know.