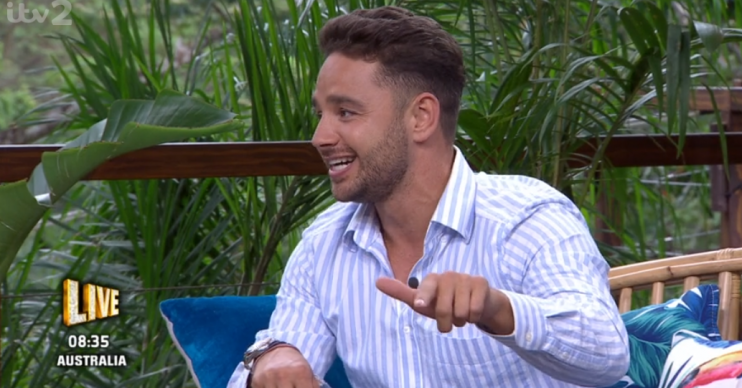 Andy Whyment’s sister has hit out at I’m A Celebrity: Extra Camp host Adam Thomas after the presenter claimed the Coronation Street actor was “playing a game”.

Adam was responding to a joke Andy made in last night’s (28.11.19) episode about driving a Kia Ceed, during a discussion about cars.

American reality star Caitlyn Jenner played a game of ‘would you rather’ with Andy, DJ Roman Kemp and several others, and they got to talking about her impressive collection of cars and areoplanes.

The former Olympian bragged about owning a super fast Porsche, which prompted Andy to admit he drove a Kia Ceed and jokingly challenge her to a race.

On Extra Camp, hosts Emily Atack, Joel Dommett and Adam Thomas were joined by presenters Ant McPartlin and Dec Donnelly for a chat about the episode, which saw the celebs take on three gruelling Reckoning challenges.

Emily said, “Andy made me laugh soooo much in this episode” and Ant agreed, “Good episode for Andy, it was”.

“It was, the Kia Ceed,” Emily continued, adding: “I have to be honest, I don’t know about cars because I don’t drive. So I thought Kia Ceed was a type of vegan porridge.”

Shockingly, Adam then blurted out: “I think Andy’s playing a game now. He’s not got a Kia Ceed! He was just paid a lot of money to say that.”

The other hosts exploded with a mix of disbelief and outrage, with Emily and Joel Dommett shouting “No!” and Ant telling him, “No way! Shut up”.

Adam then backtracked somewhat as he said: “I’m joking. Imagine though. No, for me Andy’s just brilliant in there. He brings a bit of laughter, a bit of fun as well.”

He really is just the nicest down-to-earth person and I couldn’t be any more proud of him.

Afterwards, Andy’s sister Lisa took to Twitter to hit back at the claims and defend her brother.

She tweeted: “For the record @adamthomas21, my brother does drive a Kia Ceed and is not playing a ‘game’!

“He really is just the nicest down-to-earth person and I couldn’t be any more proud of him @imacelebrity @antanddec #ImACeleb #AndyToWin #imacelebrity.”

For the record @adamthomas21 my brother does drive a Kia Ceed and is not playing a “game”! He really is just the nicest down to earth person and I couldn’t be any more proud of him @imacelebrity @antanddec #ImACeleb  #AndyToWin #imacelebrity

Andy was a hit with viewers as soon as he appeared on the show as a latecomer with Call the Midwife actor Cliff Parisi.

Within minutes of his jungle entrance, fans rushed to Twitter, absolutely convinced he’s going to be the one crowned King of the Jungle.