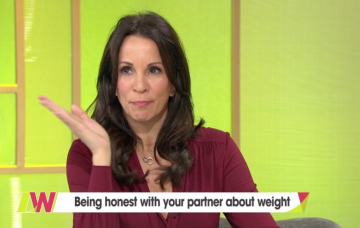 Andrea McLean has revealed she was “brutally fat-shamed” by an ex-husband who bought her rice cakes instead of biscuits because of her weight.

The slender Loose Women host said she was left “shocked” by her former partner.

It came during a discussion on today’s show about how to deal with other-halves saying they didn’t fancy their wives if they became fat.

Read more: Andrea McLean reveals cruel comments her ex made after she’d had a baby

Andrea, 49, said: “I put on four stone with each pregnancy and it took me a long time to lose the weight.

“I can remember, I won’t say which husband, having done the weekly shop saying, ‘You might notice we haven’t got any biscuits in because look at the size of your…’ and he said ‘bum’.”

Andrea continued: “As he was putting rice cakes up into the cupboard, I was so in shock.

“That was like the equivalent of ‘Here’s your salad’, just in a slightly more brutal way.

“So I know how it feels to have someone literally fat-shame you in your house.”

Penny Lancaster, who was also on the panel and is married to rock star Rod Stewart, said: “I’ve never actually been in that position because my husband is a really good guy and he loves all my curves.

“I’m actually 30lb heavier today than I was before I had children. That’s a hell of a lot of weight.

“If he saw that I was distressed, like if I didn’t fit into any of my clothes, he would say, ‘I love you just the way you are, you’re gorgeous, but if it’s upsetting you then why don’t we spend more time in the gym or why don’t we go for a run?’ but to make me feel better about myself, not worse.”

Andrea replied: “And you talk about it, rather than being like, ‘Here’s the salad, here are the rice cakes’.

“If I ever see rice cakes again…” she added.

One appalled viewer tweeted: “Andrea Maclean was fat shamed? [Bleep] off. Sorry but just [bleep] off.”

Have you ever been fat-shamed by a loved one? Leave us a comment on our Facebook page @EntertainmentDailyFix and let us know what you think!