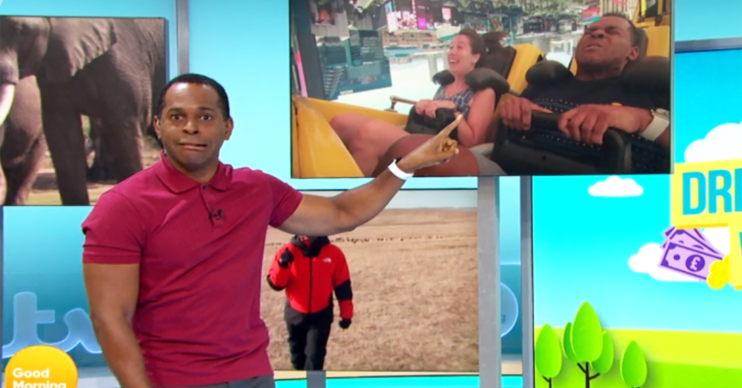 Andi quickly realised she might not have told people

Andi Peters was left cringing on GMB as he accidentally spilled that a producer was engaged.

On Thursday’s show (August 27), the presenter was telling viewers about the competition segment.

Host Sean Fletcher pointed out an image behind Andi, 50, which showed himself on a rollercoaster with producer, Claire.

Andi went to wish Claire a congratulations on her engagement before realising she may not have shared the news with her friends.

What did Andi Peters say?

He said: “By the way, this young lady here Claire, congrat…”

Pausing, he added: “Oh, she might not have told anybody.

“Ehh, awkward, congratulations. Oh dear, what have I done?”

Ranvir said: “She’s on the telly, why would anybody have a picture with Andi Peters unless there was a reason?”

However, Andi replied: “No, she’s one of my producers – I know she doesn’t look old enough. She’s just got engaged.

I’ve told everyone she’s got engaged, I go congratulations.

“I’ve told everyone she’s got engaged, I go congratulations.”

After that, he added: “Everyone must know. Congratulations.”

Meanwhile, Andi recently won over Lorraine viewers after taking over hosting duties on the programme over the summer.

Ahead of his Lorraine debut, Andi said: “From the week beginning the 10th of August, I’ll be there.”

In addition, Lorraine Kelly revealed: “Actually, I’ve been trying to get Andi to present my show for ages but he’s always been away filming in exotic locations.

Christine Lampard is now hosting the show this week and Lorraine will return from September 1.

Meanwhile, one fan wrote on Twitter: “@ITV you should be looking to give the warm, funny, genuinely entertaining star that is @andipeters more air time or even better his own show.

Read more: Andi Peters thanks fans as they beg for presenter to get his own ITV show

“He is so endearing you just have to love him.”

Did you enjoy watching Andi on Lorraine? Leave us a comment on our Facebook page @EntertainmentDailyFix and let us know.