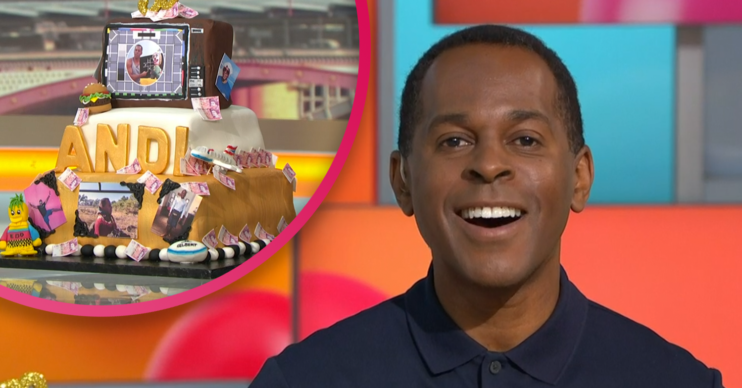 But those tuning into Good Morning Britain are refusing to believe that’s his real age.

Viewers were quick to take to Twitter to express their shock at Andi’s age while wishing him happy birthday.

“@andipeters WOW 50! Never! Happy 50th Birthday! Been making me chuckle since the broom cupboard,” wrote one.

“Welcome to the club! Keep doing what you do! Stay safe and well in these crazy time!”

Another added: “Happy Birthday @andipeters you haven’t aged a bit since I first met you! 50 doesn’t make sense have a great day!”

Moments later, a third added: “He looks about 30 lol must be the cream he uses @andipeters what cream you using?”

A fourth tweeted: “He seriously looks no more than 30 at the most .. incredible!!”

Shortly after, another viewer commented: “What a lovely human @andipeters is. 50 and doesn’t look a day over 30.”

Ant and Dec, Lisa Snowdon, Richard Arnold, Piers Morgan, Susanna Reid and Kate Garraway are just a few of the celebs who sent him their best wishes.

However, Piers couldn’t resists using the air time to throw in a cheeky dig, commenting Andi’s youthful looks were thanks to his plastic surgeon.

Andi hit back afterwards: “Let’s just put it out there, that’s fake news.

“Do you know what? Maybe I’m lucky. There is that phrase black don’t crack – and I think its’ absolutely true.”

Revealing his anti-aging hack, Andi added: “I used to rub olive oil on my skin when I was at school. Maybe the secret is olive oil.

“That’s the trick I’m telling you – olive oil all over.”

Charlotte Hawkins then joked all the incredible trips abroad he enjoys for work probably help too.

But Andi wasn’t having any of it.

“They’re working trips abroad which I haven’t done many of this year,” he laughed.

Andi then showcased his incredible birthday cake which of course included a picture of his old pal Edd the Duck.

But he joked he wouldn’t be sharing any with his co-stars: “Look at that!

“Obviously, I would traditionally offer you all some cake but I’m not going to.”