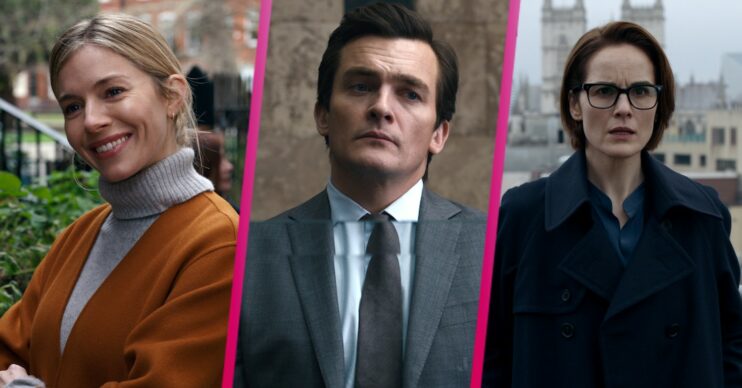 Anatomy of a Scandal on Netflix: What’s it about, how many episodes is it and when does it start?

Sienna Miller and Rupert Friend star in the gripping thriller

Anatomy of a Scandal is THE next big drama to start on Netflix, and it’s already looking like it will live up to the hype – so when is the start date?

What’s it about, and who’s in the cast?

What is Anatomy of a Scandal about on Netflix?

Anatomy of a Scandal is a thriller and gripping courtroom drama, says Netflix.

It follows married couple James and Sophie Whitehouse, who mix with the elite.

He’s a prominent MP, with a loving family at home…

Until a dirty secret suddenly comes to light.

Her prosecution threatens to tear into Westminster, the Whitehouse marriage, and her own personal esteem…

Netflix describe it as “an insightful and suspenseful series about sexual consent and privilege set in London”.

Anatomy of a Scandal addresses the issue of sexual assault.

It delves into the trauma experienced by survivors.

Yes, it’s another Westminster scandal – but, at least this time it’s fictional!

Although some viewers may mistake the plot for the BBC news…

Anatomy of a Scandal streams from Friday April 15 2022.

All six episodes will be available to binger watch from that date.

The series will be available to watch to all Netflix subscribers.

Is Anatomy of a Scandal based on a book?

The TV drama is based on the bestselling novel of the same name by Sarah Vaughan.

The author is also executive producing the Netflix adaptation.

The 2017 book ultimately revolves around a marriage rocked to the core.

Westminster politician James Whitehouse and his wife Sophie’s marriage is tested after he’s accused of rape.

Sarah Vaughan wrote Anatomy of a Scandal, her third novel, in 2016.

The novel has been adapted for the screen by David E Kelley.

He’s the man behind The Undoing and Big Little Lies – and also husband to Michelle Pfeiffer.

Anatomy of a Scandal start date: Is it based on a true story?

Although the story is fictional, author Sarah Vaughan drew on her knowledge of politics to write the novel.

She trained as a journalist, and worked as a news reporter under the byline of Sarah Hall.

Sarah covered the trials of Jonathan Aitken and Jeffrey Archer.

She tells The Times: “It wasn’t very hard to conjure up an amalgamation of entitled men I’d known.”

In fact, she admits it was an interview with the current PM Boris Johnson that partly inspired the character of James.

In 2004, she spoke to him the day after he’d been sacked as shadow arts minister for lying about his affair with Petronella Wyatt.

At the time, he was married to Marina Wheeler.

He had dismissed reports of the affair as “piffle”.

Sarah says: “I don’t think in any way that Boris Johnson would ever assault anybody.

“What really struck me was that he didn’t have any compunction about lying.

“[…] It was very clear that he had a very different moral compass, that he was playing by different rules.”

How many episodes is Anatomy of a Scandal?

The series is six episodes.

Anatomy of a Scandal start date: Where is it filmed?

The drama was mostly film in Greater London last year.

Part of the series was filmed in Oxford.

The trailer for the series clearly shows two characters running through the city’s streets.

In March 2021, areas around the city such as New College Lane, and Pembroke Square were closed.

Filming for the first series also took place at Shepperton Studios in Surrey.

He’s a rising star in the Conservative Party, Home Office minister and close friend of the Prime Minister.

The ambitious junior minister James has led an entitled life.

When James’ affair with parliamentary researcher Olivia comes to light, he initially rides out the scandal.

However, when an allegation of rape follows, James faces a very public court case.

We don’t want to objectify actor Rupert Friend, but can anyone recall such a good looking MP in the House of Parliament?

The British star, 40, is also known for playing Mr. Wickham in the 2005 film Pride & Prejudice.

He played Prince Albert in The Young Victoria, and Vasily in The Death of Stalin.

He also starred as Guru Bob in High Desert.

She’s an Oxford graduate who is a happily married mother of two.

That is until her husband is accused of sexual assault.

She stands by him, but will she get her husband back?

TV shows include The Loudest Voice, Keen Eddie, and Bedtime.

Kate is a steely criminal barrister.

She specialises in prosecuting sexual crimes.

She takes the case for her own complex reasons, which are eventually revealed.

She also played Rosalind Pearson in the 2019 film The Gentlemen, and Nancy in 2014’s Non-Stop.

Naomi Scott stars as Olivia Lytton in the cast of Anatomy of a Scandal.

Olivia is a parliamentary researcher with a bright future.

She accuses James Whitehouse of rape, and walks directly into a media storm.

Naomi, 28, is famous for her role as Jasmine in Aladdin.

She will reprise the role in the upcoming sequel.

The actress went on to play Elena in the latest Charlie’s Angels film.

She’s also starred as Megan in the 2009 series Life Bites, and Maddy Shannon in Terra Nova.

Anatomy of a Scandal is on Netflix from Friday April 15 2022.

Do you fancy watching Anatomy of a Scandal on Netflix? Leave us a comment on our Facebook page @EntertainmentDailyFix.