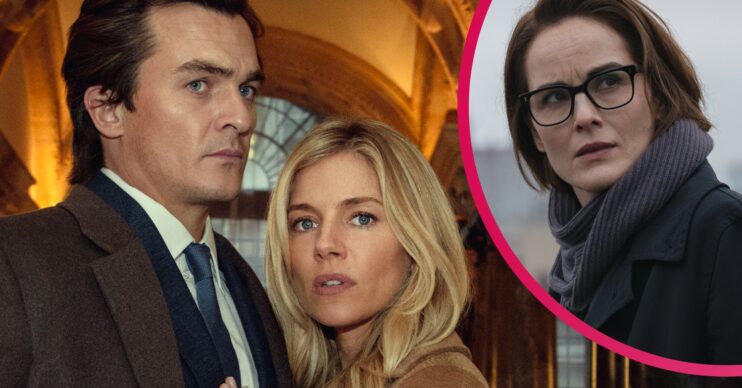 OPINION: Netflix’s Anatomy of a Scandal lets its viewers down with shamefully bad ending

The Michelle Dockery series got it all wrong

Anatomy of a Scandal promised viewers an intelligent look at the issue of consent and we were SO ready to watch justice be served – something the ending tragically failed to deliver.

The climax of TV dramas are often supposed to make us GASP out loud, and Anatomy of a Scandal does just that – but for all the wrong reasons.

Yes, I sound like a petulant child – but if James Waterhouse can get away with it, then so can I!

Here’s all the reasons why the ending of courtroom drama Anatomy of a Scandal got it drastically wrong.

***Warning: spoilers from Anatomy of a Scandal ahead***

Did James Waterhouse rape Olivia Lytton in Anatomy of a Scandal?

The final episode of Anatomy of a Scandal saw James Waterhouse cleared of raping his assistant Olivia Lytton.

However, viewers knew that he was, in fact, a rapist.

In uncomfortable scenes, James admitted calling his assistant a “prick tease” but insisted she wanted to have sex with him.

He is unrepentant, and shows zero remorse for Olivia Lytton.

In a chilling conversation with his wife Sophie, James said he “would never ever” force himself on a woman.

And he believes it.

He tells himself that Olivia Lytton, and Holly Berry before that, “wanted it”.

Which is why it’s SO disappointing that he DOES get away with it.

The moral of this story is that James walks free, and will no doubt do it again.

What happened in the ending of Anatomy of a Scandal?

Although James is cleared of rape, he is implicated in the death of a fellow ‘Libertine’ member who dived off the top of a roof after taking heroine.

But that is NOT the punishment we wanted James to get.

Yes, the current PM supplied the drugs, and James binned the evidence, but the dead Libertine JUMPED and wasn’t PUSHED.

So is there really a criminal case there?

Her secret identity – she is Holly Berry – remained safe and closing scenes saw her smile at the camera.

But it felt like a hollow and rushed happy ending.

As for Olivia? Well, more on that below.

Why the ending of Anatomy of a Scandal was so disappointing

I even had the start date written in my diary with a big star beside it.

It had a brilliant and talented cast led by Rupert Friend, Michelle Dockery, Naomi Scott, and Sienna Miller!

It promised to delve into the issue of consent.

The question of consent remains a thorny, controversial topic – and Anatomy of a Scandal sadly did nothing to shed light on it.

Only one in 100 rapes reported to the police result in a charge.

And shows like Anatomy of a Scandal will do NOTHING to help this.

Pretty damning when you think that 1 in 5 women have been raped or sexually assaulted as an adult, not forgetting 1 in 20 men.

That’s potentially a lot of disappointed and triggered viewers.

So another man gets away with rape and we’re supposed to find that a satisfying conclusion to six hours of our lives?

What happened to Olivia Lytton at the end?

Olivia Lytton barely featured in the series at all, let alone the final episodes.

She appeared for the first time halfway through episode two and gave testimony in the following two installments.

But in a totally baffling decision by the makers of the show, she was not seen again.

Another stab in the back for the victim.

Olivia was completely forgotten and the ending failed to give her any closure whatsoever.

Yes, I know the series tried to make a point about consent and the privileged, white politician who believes he is entitled to anything and anyone.

But why does he get more airtime than the woman he attacked?

What huge flaws are there in the finale?

The six-part limited series just felt too glossy, and not gritty enough bearing in mind the subject matter.

No one in the history of the Houses of Parliament has ever had a wife as beautiful as Sienna Miller – naïve, gullible and stupid, yes! Stunning, no (no offence Carrie).

Meanwhile, I haven’t even mentioned the most implausible part of the story yet…

That no one recognised Kate Bancroft from her days at Oxford!

We learnt that she had also fallen victim to James Waterhouse’s “abrupt” lovemaking.

His words, not mine.

Had Holly/Kate had a face transplant as well as changing her name?

It was never revealed.

The whole time, Kate had been prosecuting the rape case of a man who had actually raped her, but no one knew.

And it wasn’t a case of revenge being served cold – a plot twist we would have LOVED – it was actually just a coincidence.

As the episodes progressed, both James Whitehouse and his wife Sophie seemed to figure it out.

But bizarrely, James stayed silent – even though he knew he could ruin her career.

What have viewers said about the Anatomy of a Scandal ending?

Of course, viewers have been divided.

Some loved it, calling it “satisfying” and “interesting”, but plenty of others felt robbed.

One tweeted: “Just finished watching Anatomy of a Scandal. Thoroughly enjoyed it…Well, until that silly ending.”

Another said: “Anatomy of a Scandal was so good. Poor ending, but still so good! 9/10.”

A third added: “What Anatomy of a Scandal portrays is a frighteningly true representation of how many rapists exist in our midst who are completely unaware of their actions because they do not comprehend what constitutes informed consent.”

“Just watched Anatomy of a Scandal,” said another, “a completely far fetched drama about criminality at the highest levels of a government made up of Oxford chums.”

Anatomy of a Scandal is currently available to watch on Netflix.

What did you think about the ending to Anatomy of a Scandal? Leave us a comment on our Facebook page @EntertainmentDailyFix.