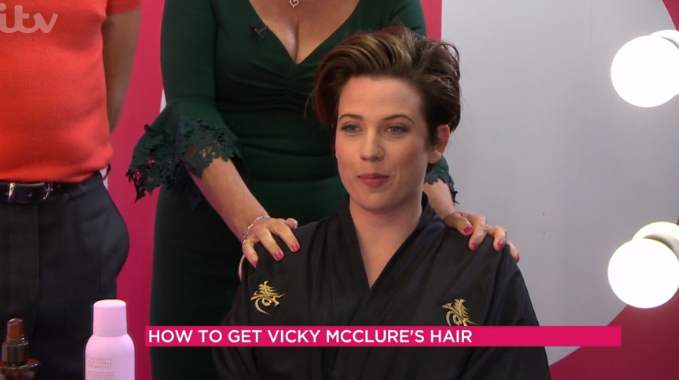 The guest had her hair cut to look like Vicky McClure

Lorraine viewers were in hysterics today as they were convinced a woman looked less than impressed with a makeover.

The woman called Kelly appeared on the daytime show to undergo a hair transformation to look like actress Vicky McClure and her character DI Kate Fleming in Line of Duty.

Vicky is known for her short pixie crop and her stylist Louis Byrne came onto Lorraine to give Kelly’s hair the chop to try and emulate Vicky’s ‘do.

Lorraine then asked Louis what he was going to do with Kelly’s longer locks.

Louis said: “We’re going to take all the underneath off. Pretty short. Longer, floppier top. Going along the lines of Vicky’s haircut but obviously everybody has different hair, so it’s about suitability.”

Louis then began cutting Kelly’s hair as Lorraine said: “There it goes… no turning back.”

Lorraine then moved on with the show and told viewers they would be revealing Kelly’s new look at the end of the programme.

Even though Kelly appeared to like her hair, viewers watching from home weren’t convinced she did.

One person wrote on Twitter: “She 100% hates her new hair #Lorraine,” while another said: “She hates that haircut. Odds on she wears a hat until it grows back #Lorraine.”

She hates that haircut. Odds on she wears a hat until it grows back #Lorraine

A third tweeted: “#Lorraine the look of regret on her face at that haircut, bless.”

#Lorraine the look of regret on her face at that haircut, bless 😂

“I absolutely love it”
When she gets home
….#Lorraine pic.twitter.com/0sHIiQSUKd

Others gushed over Kelly’s new look, with one person adding: “Love the new hairdo #Lorraine.”

Love the new hair do #Lorraine

What did you think of Kelly’s new hairdo? Leave us a comment on our Facebook page @EntertainmentDailyFix and let us know!