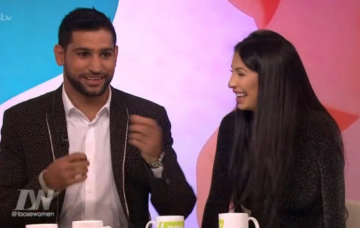 Says he can look back and laugh about it now...

It’s hard to believe it’s nearly been an entire month since I’m A Celebrity roared back into our lives.

Looking back, perhaps the biggest story to have come out of the last series involved some small red fruits.

That’s right, when Amir Khan and Iain Lee snaffled the camp’s strawberry supply, we watched through our fingers.

And it was even more awkward when Amir let Iain take all the blame from the understandably irate campmates!

Amir was also caught up in the so-called camp “bullying” scandal where he, Jamie Lomas, Dennis Wise and Rebekah Vardy were accused by viewers of treating Iain unfairly.

And since they all left the jungle, accusations have been slung in every direction from pretty much everyone who was in there.

Read more: EastEnders REVEALED: All the HUGE storylines for 2018 exposed

On an appearance on Loose Women in December, Iain spoke of his “disappointment” with Amir in particular.

Iain discussed how he and the boxer had planned to visit Pakistan together, but that Amir’s comments about him since leaving the jungle had left relationships distinctly cool.

On today’s edition of the show, Amir and wife Faryal Makhdoom were invited on to give their version of events.

They were also given the opportunity to discuss the state of their marriage, which had its fair share of ups and downs in 2017.

Amir discussed the communication issues he and Faryal had suffered, saying: “We want to change things. The way things went public, the anger sometimes takes over and that happened in 2017.

“Going to the jungle definitely helped me as well. People asked me and said ‘Why are you going in the jungle, you’re still a fighter.’ For me, it was good to get away. It was a detox for me.”

It wasn’t long before the Loose Women pounced on Amir, and brought up the issue of him and Iain pinching the camp’s strawberries.

Amir partly blamed the misdemeanour on the folly of youth, even when he was accused of lying and saying it was all Iain’s fault.

The boxer laughed: “I didn’t say it was all Iain’s fault! I said it was my fault as well. My teammates really looked up to me in the jungle.”

“I like Iain, between me and him there’s no beef at all and I’d love to see him. Looking back it’s something to laugh about.

“At the time I was upset with him because I’d said let’s not tell them [the campmates] straight away. People were expecting strawberries, if we tell them straight away they’d be upset – we should have waited until after dinner!”

Concluding the chat, Faryal said that her and Amir’s goals for 2018 were to communicate much better with each other.

Andrea McLean said that if anyone could understand that, it was the Loose Women panel – and waved the couple off the set.