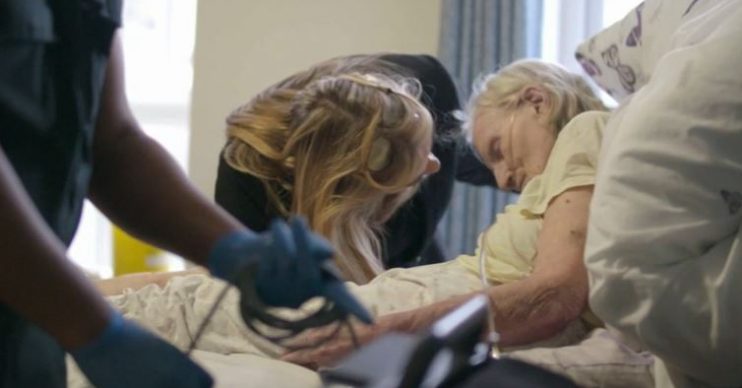 BBC documentary series Ambulance had viewers in floods of tears in the closing episode of the series.

During last night’s (July 11) installment, someone called 999 about an elderly lady at a care home.

When paramedics Cassie and Ray arrived on the scene, they found the patient in bed and struggling to breathe.

Ray told her: “Josie? My name’s Ray, I’m with the ambulance service, sweetheart. We’re going to look after you, okay? All right my lovely.”

They assessed her condition and asked Josie’s daughter Trish, who was at her bedside, if her mum had any heart problems or diabetes.

At one point, Ray tenderly wiped the patient’s mouth and said: “Oh bless her. Come here my lovely, come on. Let’s get you sorted.”

It then became apparent that Trish faced a heart-wrenching decision over her mum’s care.

The paramedics had identified red flag sepsis, which meant she needed to be whisked away to hospital for emergency antibiotics. But Trish wondered what good that would do her mum.

She told paramedics Cassie and Ray: “Because of the experience of my mum being in the hospital in the past, I absolutely know it’s not the best thing for her, she just gets left.

“If she went to hospital and we gave her, presumably, IV antibiotics, is that going to improve her? Is it going to make her better and improve her quality of life?”

While on the phone to clinical support, Cassie revealed that the patient was expected to die “within a few days” and was suffering from both advanced dementia and lung cancer.

Josie’s GP arrived and agreed that keeping her in the home was the best thing for her. She was then taken off oxygen support, and as the paramedics left, Ray gave Trish a big hug.

At the end of the programme, viewers were told that Josie died peacefully at the care home two days after filming.

Reacting to the sad scenes on Twitter, some viewers praised the paramedics for being so compassionate while others felt for Trish.

One said: “Oh Josie, I’ve just cried so much, once upon a time she was someone’s little girl now she’s end of life, god bless you #Ambulance.”

Someone else tweeted, alongside a string of broken-heart emojis: “Josie. Her poor daughter #Ambulance.”

A third said: “Heartbroken for Josie and her daughter. So desperately sad. Brilliantly handled #Ambulance.”

Oh Josie, i’ve just cried so much, once upon a time she was someones little girl now she’s end of life, god bless you 😢 #Ambulance

Heartbroken for Josie and her daughter. So desperately sad. Brilliantly handled #Ambulance

Another wrote: “Omg this is heartbreaking, poor Josie #Ambulance.”

A fifth tweeted: “Heartbreaking Josie. Such lovely care from the paramedics for her and her daughter #Ambulance.”

“How lovely is that paramedic giving Josie’s daughter a hug before he left?” wrote a sixth, adding: “So much compassion and empathy #Ambulance.”

How lovely is that paramedic giving Josie's daughter a hug before he left? So much compassion and empathy #ambulance