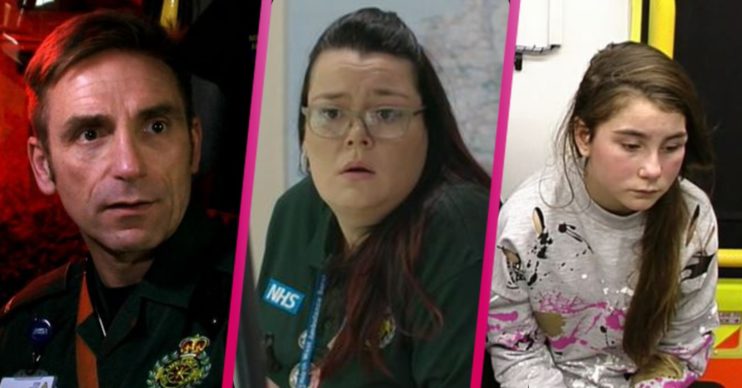 A case of mistaken identity

Viewers were shocked watching last night’s Ambulance when paramedics were called for a young girl who was punched repeatedly on her own doorstep.

During Thursday’s (July 9) instalment in the often-emotional BBC documentary series, police officers called 999 for a 12-year-old girl, Ria, who was assaulted by an adult male.

What happened on last night’s Ambulance?

When the paramedics arrived, Ria fought back tears as she explained: “Me and my friends were coming back from a house when two men started heading towards us in the alleyway. I started running because they started shouting at us and then I got to the door.

“I thought it’d be on the snib, so I ran into the door and the man came and got at me. He started hitting me and said, ‘Where are the dogs?’ and I said, ‘I don’t know about any dogs’. Then he hit me again and ran.”

Ria went on to explain that the stranger hit her four times and knocked her over, causing her to hit her head against the glass on her front door. Paramedics put it down to a case of mistaken identity.

That broke my heart, poor girl.

Her mum explained that Ria was supposed to be performing for her school in an athletics competition in just a few days’ time.

One of the paramedics reflected afterwards: “I think it leaves you quite angry. And it does sadden me, I’m disappointed with how people behave.”

The other said: “I think that’s disgusting that. A little kid can’t go out with her friends without being assaulted.”

On Twitter, viewers were also “disgusted” by what happened.

One said: “I hope Ria recovers from her assault, I mean mentally as well as physically for her ordeal. Adults are supposed to be the protectors of children #Ambulance.”

Another replied: “That broke my heart, poor girl. Hope she will be OK mentally.”

A third tweeted: “Poor Ria. How absolutely disgusting. I hope she gets the help she needs to deal with the trauma #Ambulance.”

“A grown man has a assaulted a 12 year old girl. Absolutely sickens me,” someone else wrote. “Hope he’s been found by the police. What’s wrong with the world? Not even safe for kids to play out now. Hope this doesn’t affect Ria in the long run. #Ambulance

Poor Ria – how absolutely disgusting. I hope she gets the help she needs to deal with yhe trauma #Ambulance

A grown man has a assaulted a 12 year old girl. Absolutely sickens me. Hope he's been found by the police. What's wrong with the world? Not even safe for kids to play out now. Hope this doesn't affect Ria in the long run. #Ambulance

At the end of the episode, an on-screen message explained: “[Ria’s attacker] was convicted of battery and received a suspended 21-week sentence and community service.

“Ria missed representing her school in gymnastics but is now slowly rebuilding her confidence.”