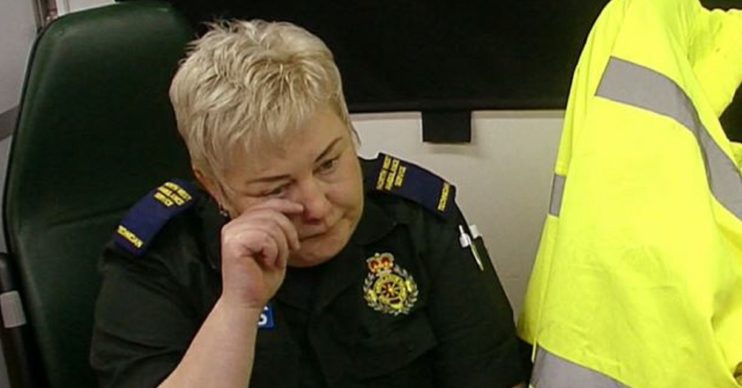 Ambulance on BBC One: Viewers devastated over story of five-year-old learning his mum has died

He had to help break the news to him

BBC viewers were tearful last night after a patient on Ambulance opened up about the heartbreaking moment a little boy was told his mum had passed away.

During Thursday (June 11) evening’s episode of the often-emotional documentary series, viewers met a man involved in an accident with a cherry picker.

What happened on Ambulance?

Read more: Ambulance on BBC One: Viewers in tears as baby dies after heartbreaking 999 call

The machine had rolled over his foot, crushing it right through his steel-capped boot.

As he rode in the ambulance with paramedic Mandy, he recounted a devastating story that had her in bits.

After telling the crew members he had never had a day off sick in 24 years, the man said: “The only time I was off work was when I lost my daughter, 14 months ago. 40, she was.”

Asked if she had any children, he revealed: “One. Jacob. He’s seven now. He’s a terror.”

He explained: “She had her 40th birthday party in the April. Had a big party. 1920s style. And [her partner] got down on his knee and asked her to marry him, you know.

“And she said, obviously, yes. Next thing you know, she gets breast cancer. Then a bit cut off for something.

“Then it went up to there,” he explained. “Back of the head, onto the top of the cord on top of her neck. Then she had the fluid on the brain. They told us, ‘Look, you’ve got about a week with her’.

Breaking the news to her son

The man went on to talk about the moment he had to help break the news to his grandchild.

He was only five.

“[Her partner] said to me, ‘Can you be with me when I tell Jacob? Because you just ask stupid with him all the time’. Which I do. So I said, ‘Yeah, no problem’. He just went back and we had to tell him, Jacob. He was only five.

Reacting on Twitter, one viewer said: “Man, ‘cherry picker’ guy had such an emotive story, yet told it in such a controlled and powerful way. I challenge anyone not be affected by this #Ambulance #respect.”

Another wrote: “Omg, cancer touches so many lives, so cruel and does not discriminate. That guy’s story about losing his 40-year-old daughter was totally heartbreaking, just gobsmacked, off again #Ambulance.”

Man, "cherry picker" guy had such an emotive story, yet told it in such a controlled and powerful way. I challenge anyone not be affected by this #Ambulance #respect

Omg, cancer touches so many lives, so cruel and does not discriminate, that guys story about losing his 40year old daughter was totally heartbreaking, just gobsmacked, off again #Ambulance

Read more: Britain’s Best Parent: Mum and dad who admit to smacking their kids through to final

A third tweeted: “Very sad story of the guy about his daughter and cancer on Ambulance.”

Someone else said: “Sobbing. I have so much respect and am always in awe at all the paramedics and healthcare workers. They see/hear stuff we probably will never see in our lifetime. Absolute angels they are #Ambulance.”

“The saddest episode ever #Ambulance,” said a fifth.

– Ambulance continues on Thursday (June 18) at 9pm on BBC One

What did you think of the patient’s story? Leave us a comment on our Facebook page @EntertainmentDailyFix and let us know.