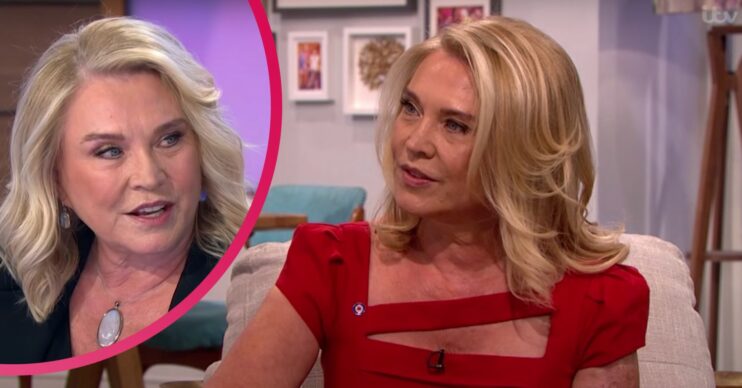 Amanda Redman has delighted viewers on TV with her performances for over 40 years. But have you ever noticed The Good Karma Hospital star’s burns scars while she’s on screen?

But she’s previously opened up about her scars, which can be seen during her performances. And shockingly, the childhood accident that caused them saw her pronounced technically dead.

What happened to Amanda Redman to leave her with burns scars?

Amanda was just 18 months old when she was scalded by soup, suffering burns to 75 per cent of her body.

The trauma was so severe that Amanda was pronounced clinically dead at hospital in West Sussex.

Read more: The Good Karma Hospital cast: Who’s in series 4 and who do they play?

Amanda subsequently underwent many surgical procedures until she was five, including skin grafts.

She recalled during an appearance on This Morning in March 2020: “I pulled this vat all over me. It was full of turkey and sauce as it was Christmas. And I pulled it over me. You could just see my legs.

“I was pronounced clinically dead. That must have been awful for my parents. Of course I don’t remember it.”

What else has Amanda Redman said about about her burns scars?

In the same TV interview, Amanda recalled how the Boxing Day 1958 accident formed some of her earliest recollections.

“My first memories are of the hospital,” she said.

“I remember some horrible things but not the same way as my parents.”

I was pronounced clinically dead. That must have been awful for my parents.

She’s also previously revealed how her mother Joan was haunted by the memory of her daughter’s tears.

Amanda told the Express in 2015: “For the rest of her days my mother would go absolutely cold whenever she heard a baby cry in a way that reminded her of that day.

“Just like any parent whose child is injured when their back is turned I think she felt very guilty.

“Even though it was nothing more than a terrible accident it stayed with her all those years.”

How her burns scars have affected her career

Despite the permanent scars she was left with, Amanda resists any idea the accident has held her back in the acting world.

Amanda said she doesn’t believe the incident, which left her with permanent scarring on her left arm, has hindered her career.

She said: “Even though 90 per cent of my body was burned, the worst scars are on my arm, but that’s it and that’s thanks to the amazing work of the hospital.”

Read more: The Good Karma Hospital: Everything we know

And on whether her scars had caused her casting problems, Amanda dismissed that thought.

She added: “I could be wrong but I don’t think about it.”

The Good Karma Hospital airs on ITV on Sunday January 30 at 8pm.